My friend Neelesh invited me out to several dance parties over the next week. I really like him as a friend, but I feel terrible that I can’t get myself to be interested in him. He clearly likes me enough to be asking me out to all these alcohol-induced places all the time. Maybe it’s nothing, maybe I’m just being a little paranoid because of how bad I feel for him. Everyone freaks out wherever we go because he’s a vampire.

Honestly, there’s nothing wrong with that. He doesn’t go out of his way to hurt people, he’s just trying to live a normal live and half fun! Anyways, to that first party he invited me to. It was these bluffs in Brindleton Bay. It was absolutely gorgeous up there on the cliffs. 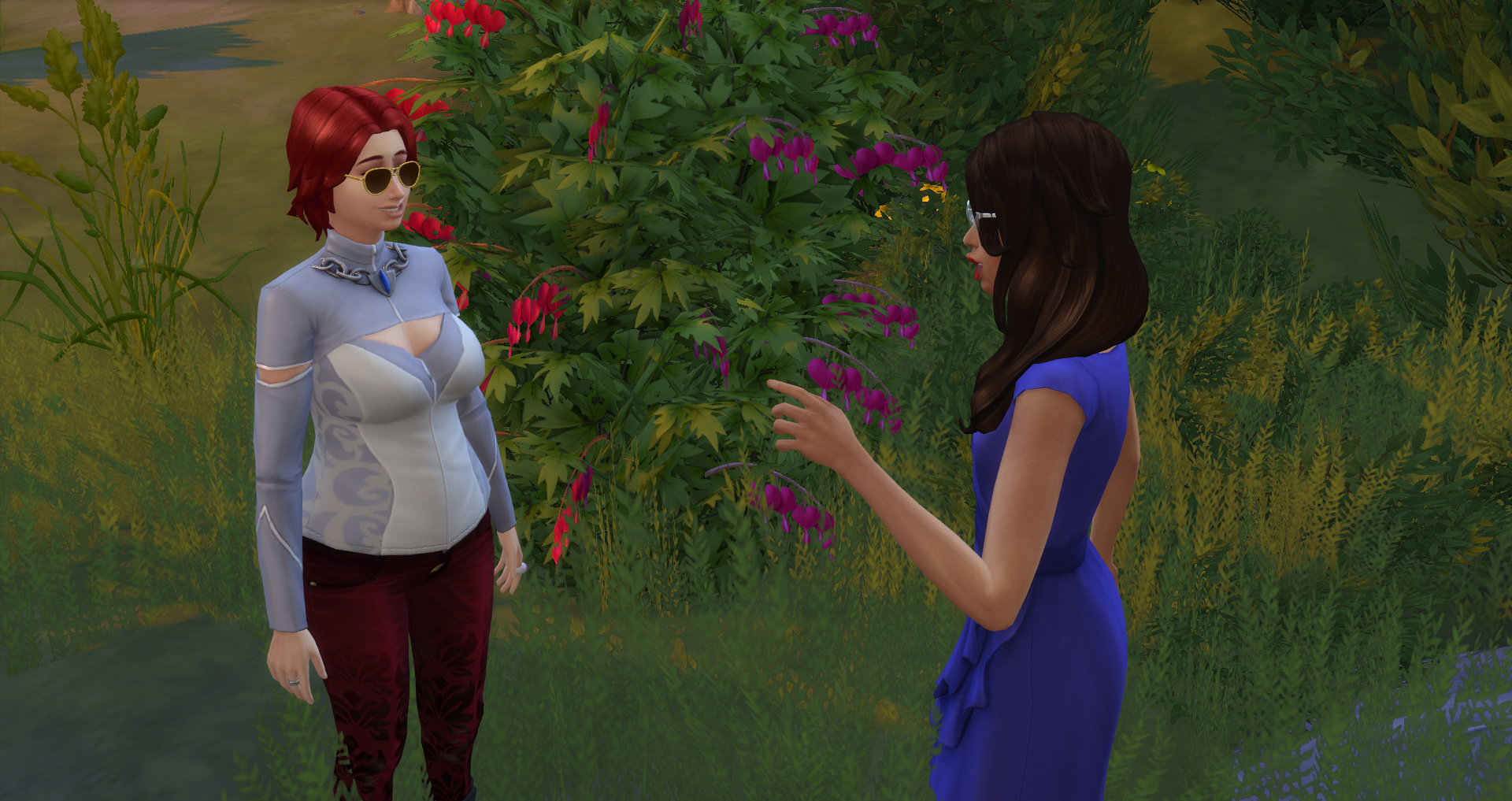 I met the bouncer Marina at the entrance and gave her the password that Neelesh had told me to get into the party, “Seamonster.” Honestly I think I would have referred “Seaman” to a monster, but I guess there’s some kind of snake creature living in the water around the bluffs. I didn’t see it though, so I’m not sure that it exists and isn’t just a folk tale to scare people. 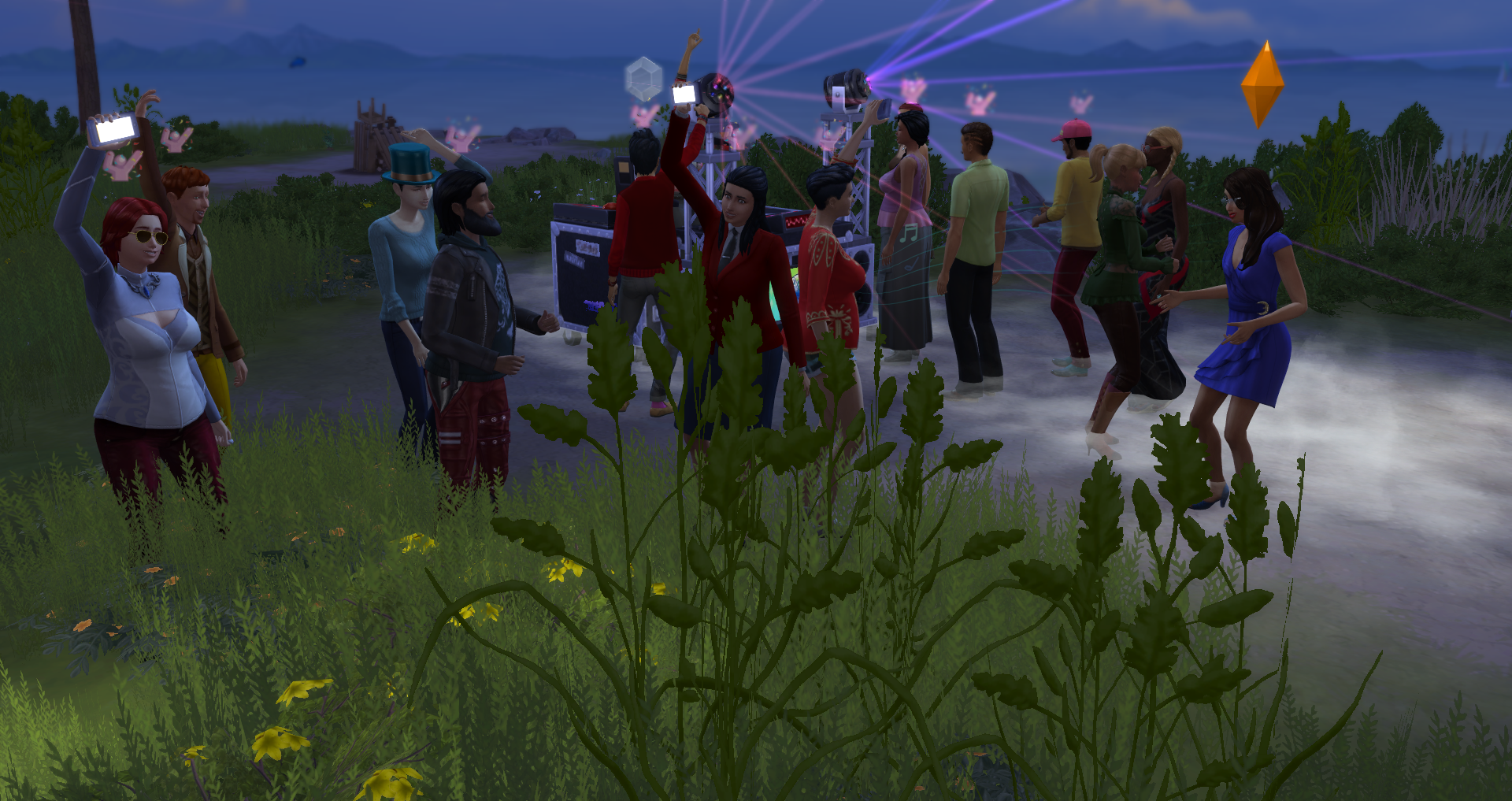 The night itself was amazing, I had a blast dancing with everyone that I met there. Some were familiar faces that i didn’t expect to see, and others were new faces that I was glad to meet. We all danced until dawn of course. 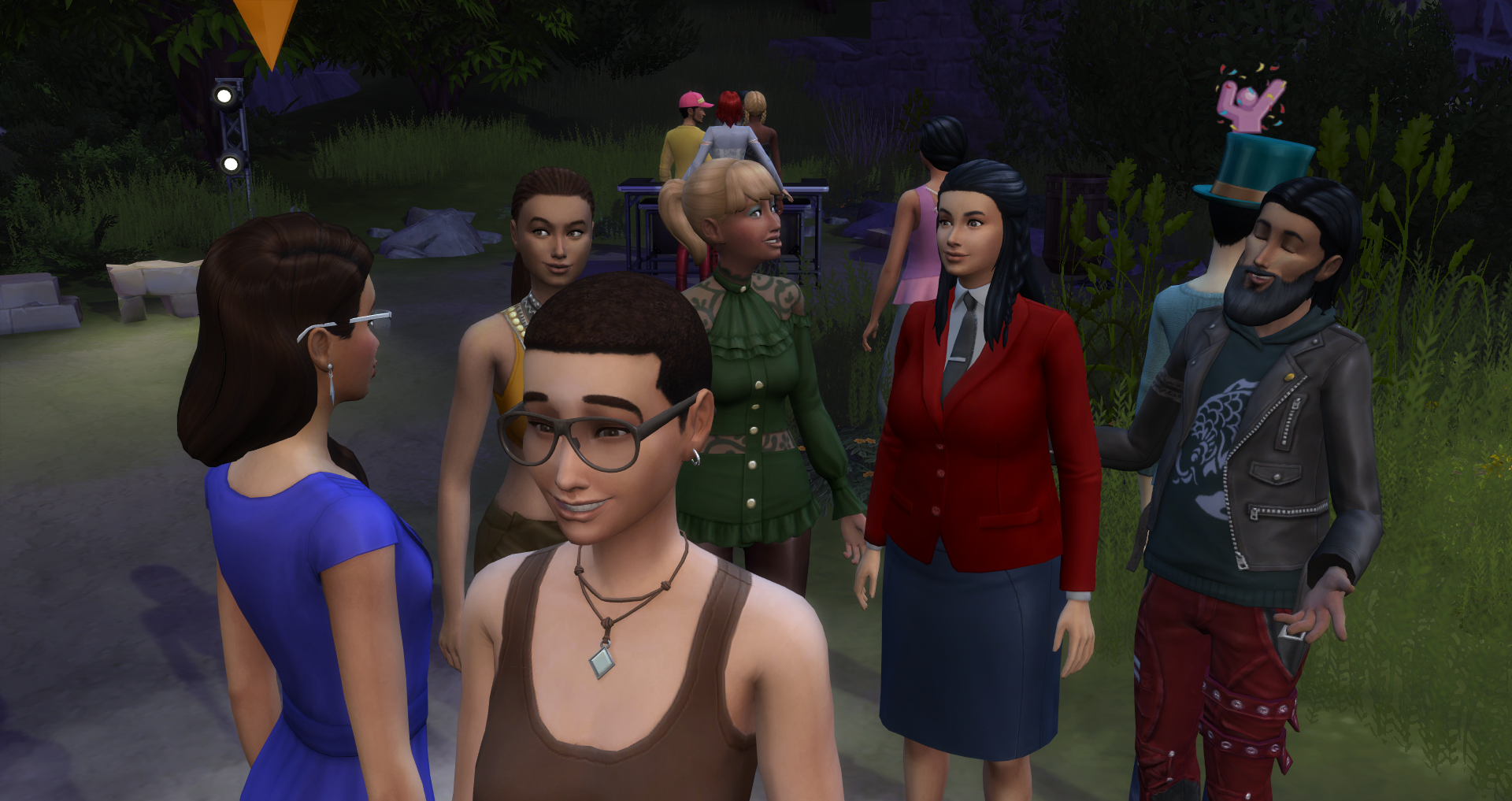 Honestly, the days have been a bit of a blur, so I forget exactly what we talked about, but I loved getting to know all these new people. I ended up chatting with Marina the bouncer who is creative. I just hope she’s not squeamish like Alberto. They spent quite a bit of time together at the bar talking about some famous artist or another.

Sanvi got a little clingy. I guess when she got shut down she decided that I was her new love. But I’m just not interested in someone that gets that jealous. It’s a trait that I can’t actually stand because it can turn good relationships ugly in a heartbeat from silly misunderstandings. And I just don’t want to be in the middle of something like that.

Now Shaurya on the other hand… that handsome man there on the right of this picture. I got a rather large crush on him during the party. I couldn’t bring myself to flirt with him though. He was constantly surrounded by women and he was loose with his flirts. He’s a very romantic guy. But he’s gorgeous, and I enjoyed talking to him, er, well, I guess I mostly listened.

Just the sound of his voice was like buttered toast. I enjoyed just listening. Of course, he doesn’t know that I exist. 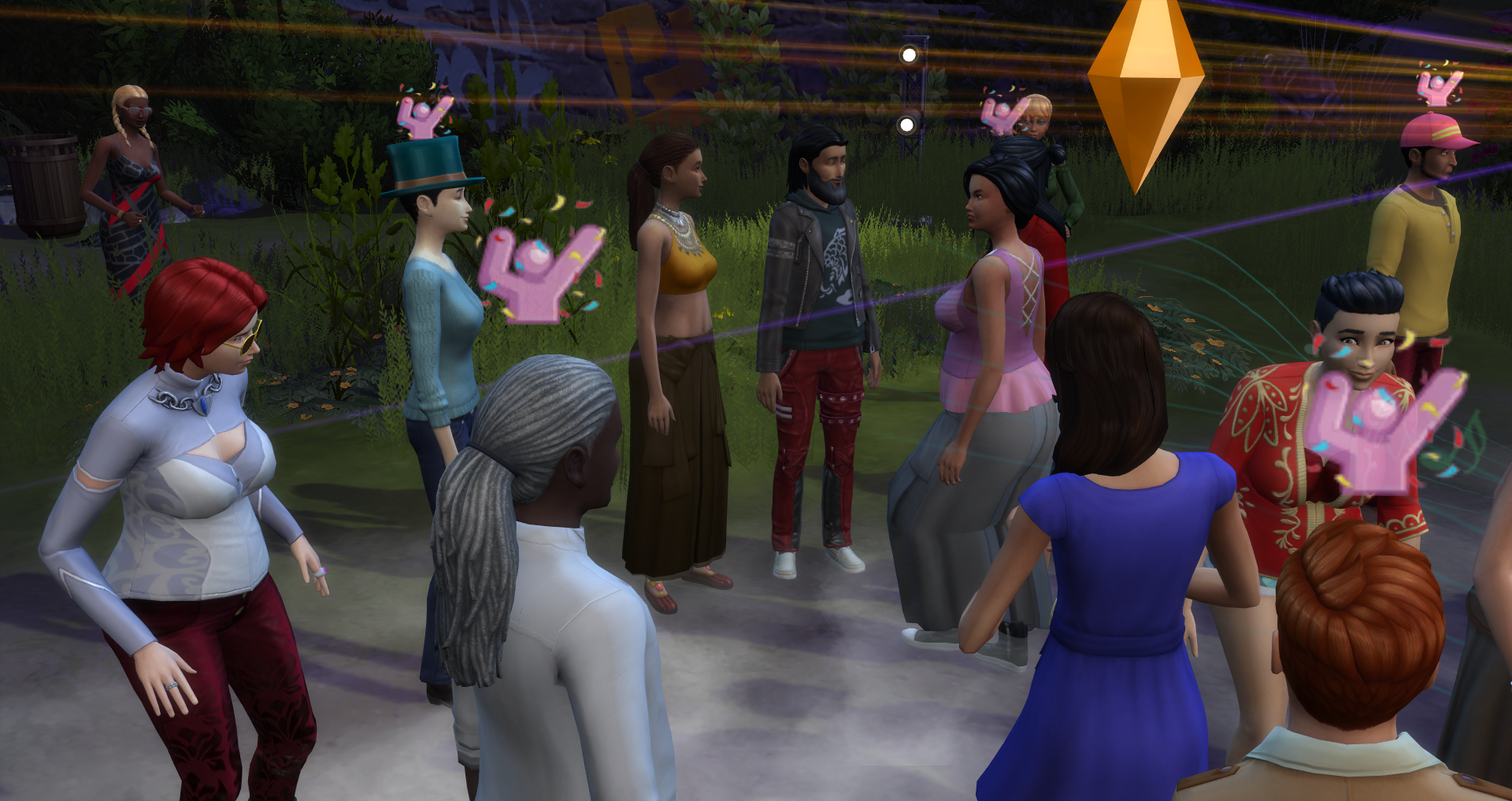 Marina noticed me looking down and came over to dance with me, ditching Alberto at the bar. I smiled at her gesture, but I hadn’t meant to put a negative spin on anyone’s night; my heart was just getting away from me. She laughed and pulled me to the center of the dance floor to enjoy myself and ignore what the rest of the world was doing.

It worked… until my stomach growled. I had to stop to get at least a bowl of chips or I was going to be eaten by my own stomach!

Do you remember “I’ll be back” guy? Guess what? He’s back… 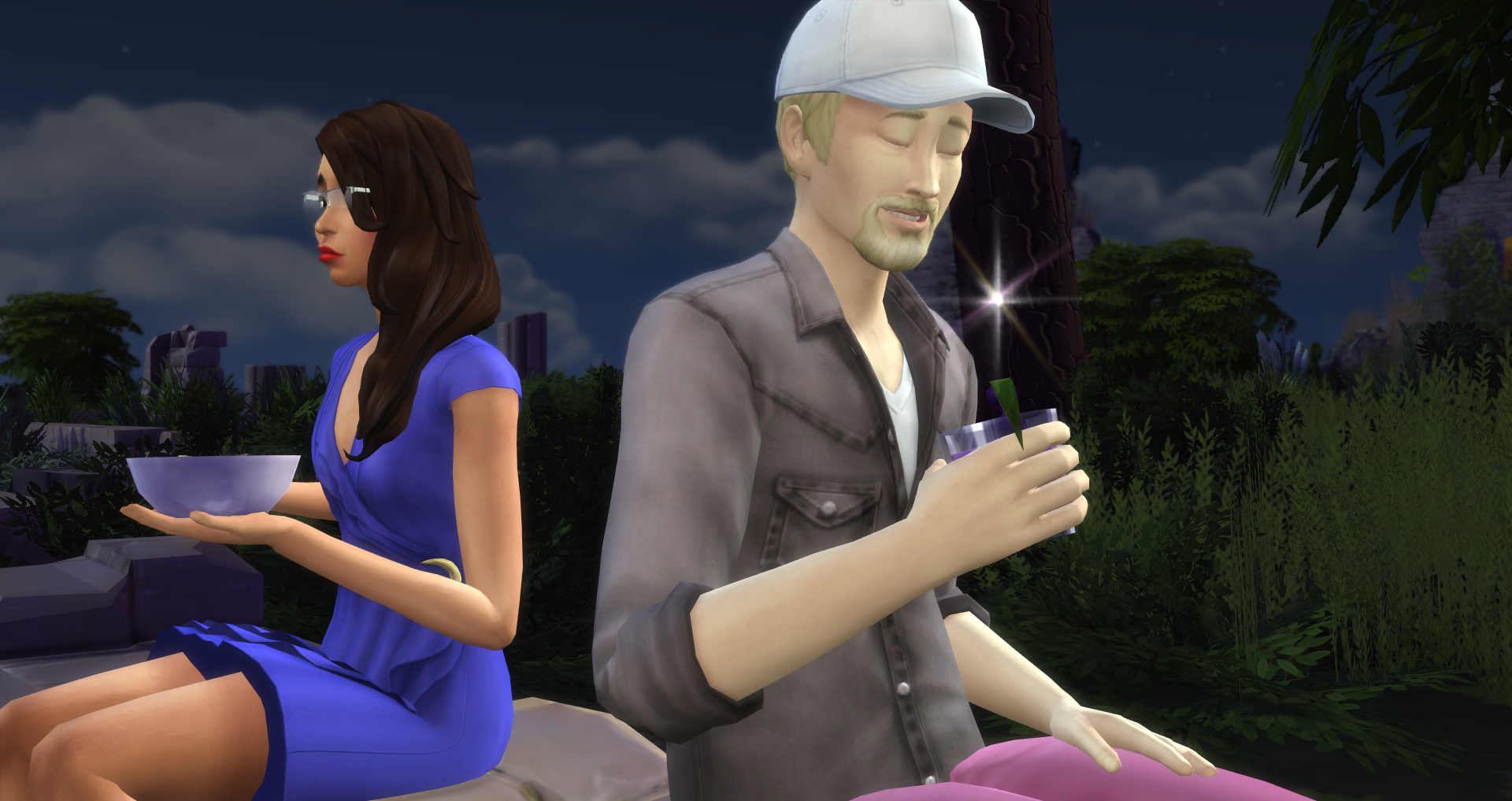 I was sitting on a bench all by myself to enjoy my chips in peace and quiet. I was ignoring everyone else and just savoring the flavor of the chips. Since all chips should be savored that way. So when he joined me on the bench i more felt his presence that saw him. Until he spoke.

“Enjoying the party chicklet? You know it won’t be long now right?” I heard the drink swish in his  cup as he swirled it, but I had no idea what he was talking about so I stayed quiet. Besides, I’m a male and he knows it. So I figured I could pretend he wasn’t talking to me.

“You will be surrounded by no one but yourself one night, and I will pay you a visit.” He downed his glass and set it on the bench next to me. “Pleasant dreams.” Than he walked away.

I wasn’t sure how I felt about going home to just Aimee anymore. At least the sun was rising, and he had made it clear that he came out only at night. I dragged my bed sleepily across the lot to be closer to the wall I put up. It isn’t quite an enclosed space yet, but I’m working on it. But it feels safer to be further away from the walking paths right now. 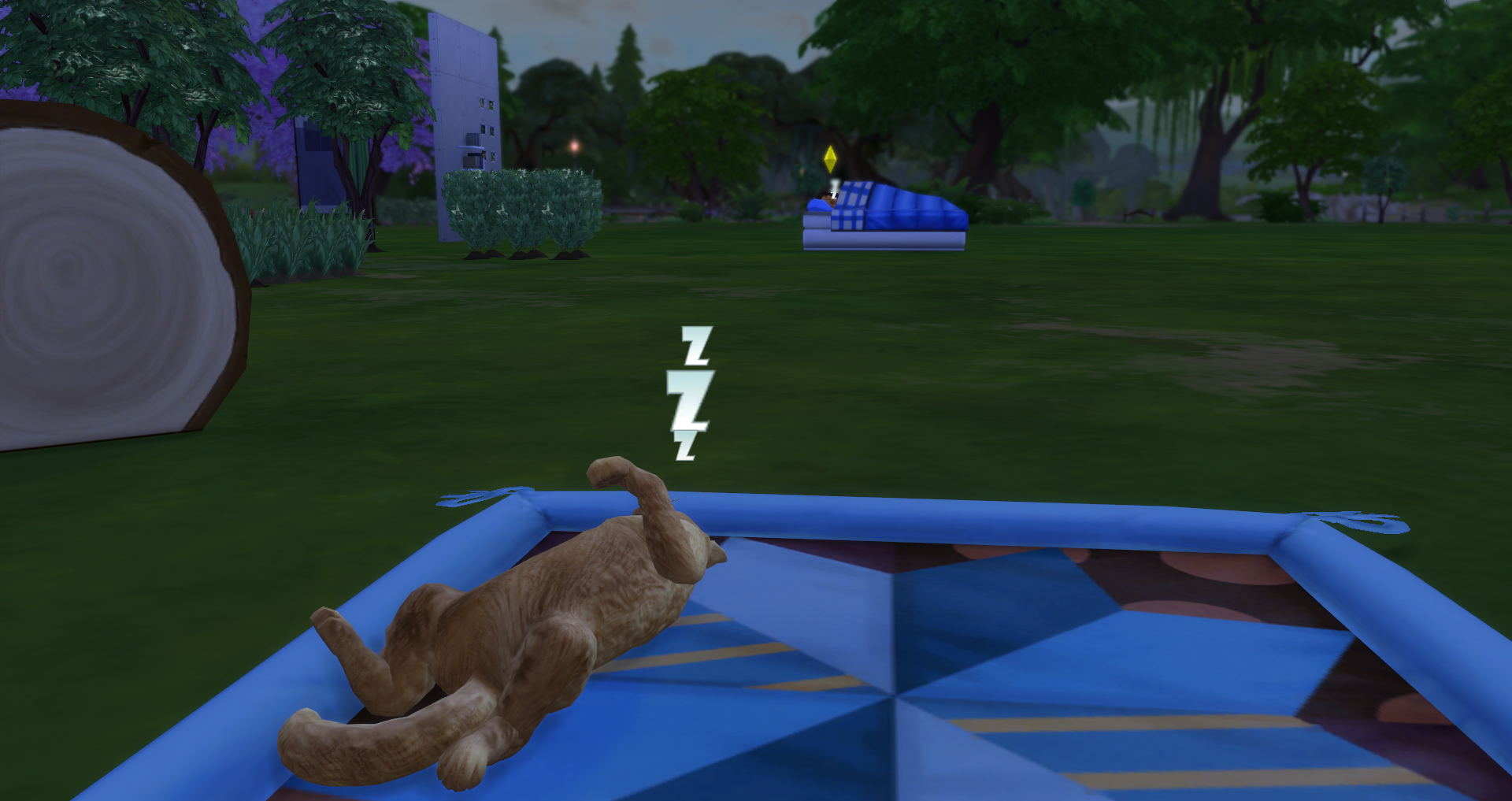 I made it through the rest of the early morning and through until around noon when I finally woke up. Which is when I decided to go for a jog. 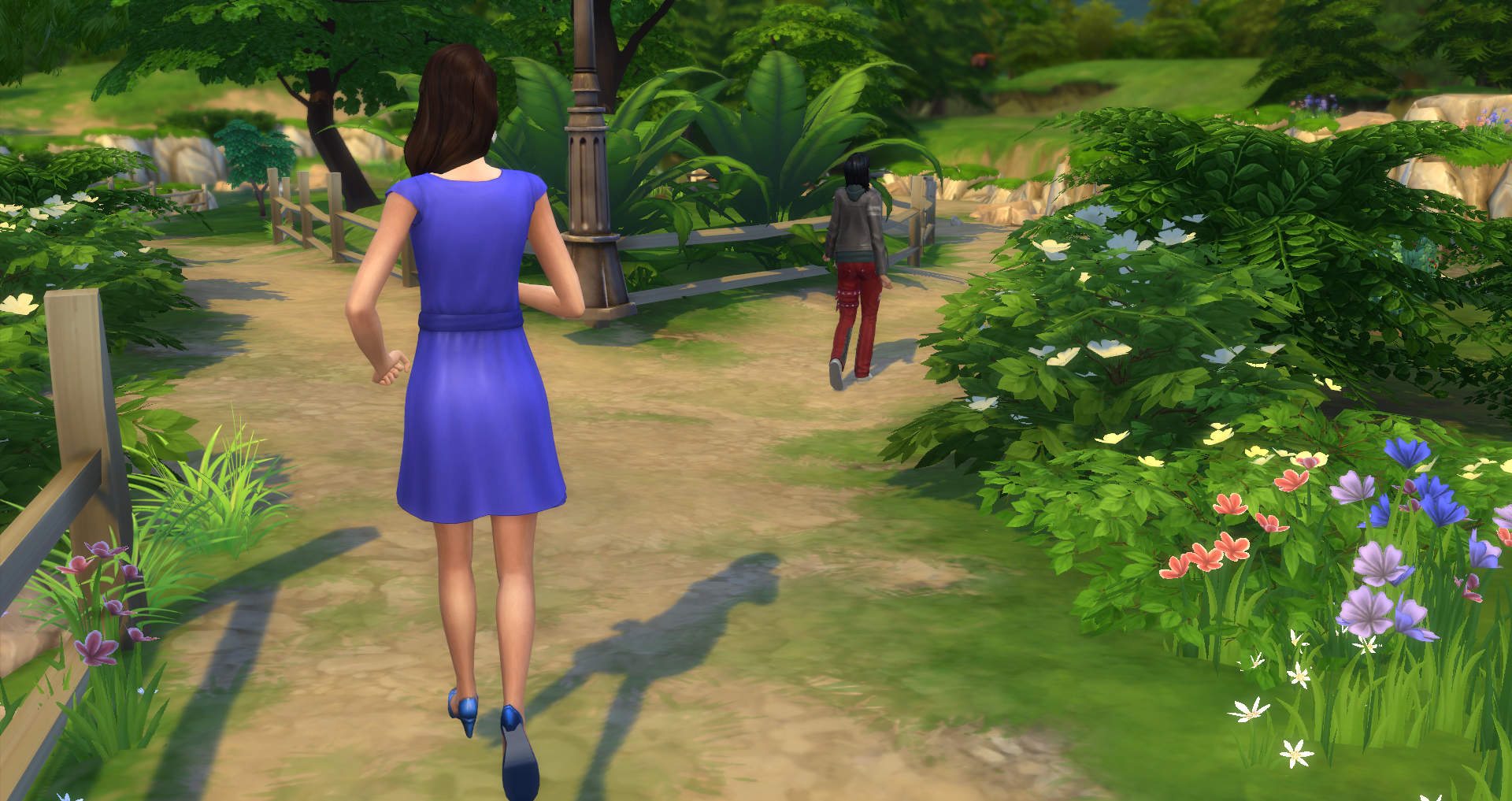 I saw Shaurya going down a different path than I had been planning to take. My heart thumped faster. Should I go after him and say hello, or was that being to creepy? I was just out for a jog to see if I could find some more plants for my garden. But gosh, just look at him.

In the end, I decided it would be too creepy. This is still considered off the beaten path, and it would seem like I was stalking him if I just ran up to him out here. Maybe once I finish the park and it gets more widely known it won’t be creepy to run into someone on the paths I’ve been cleaning up. I’m glad they are being used already though. It’s nice to know that my work is already paying off.

I found some fresh pears to pick and headed back home. Aimee has been jumping through the rings I set up every day. She really seems to love them. So I decided to let her try it once with the special feature it came with. 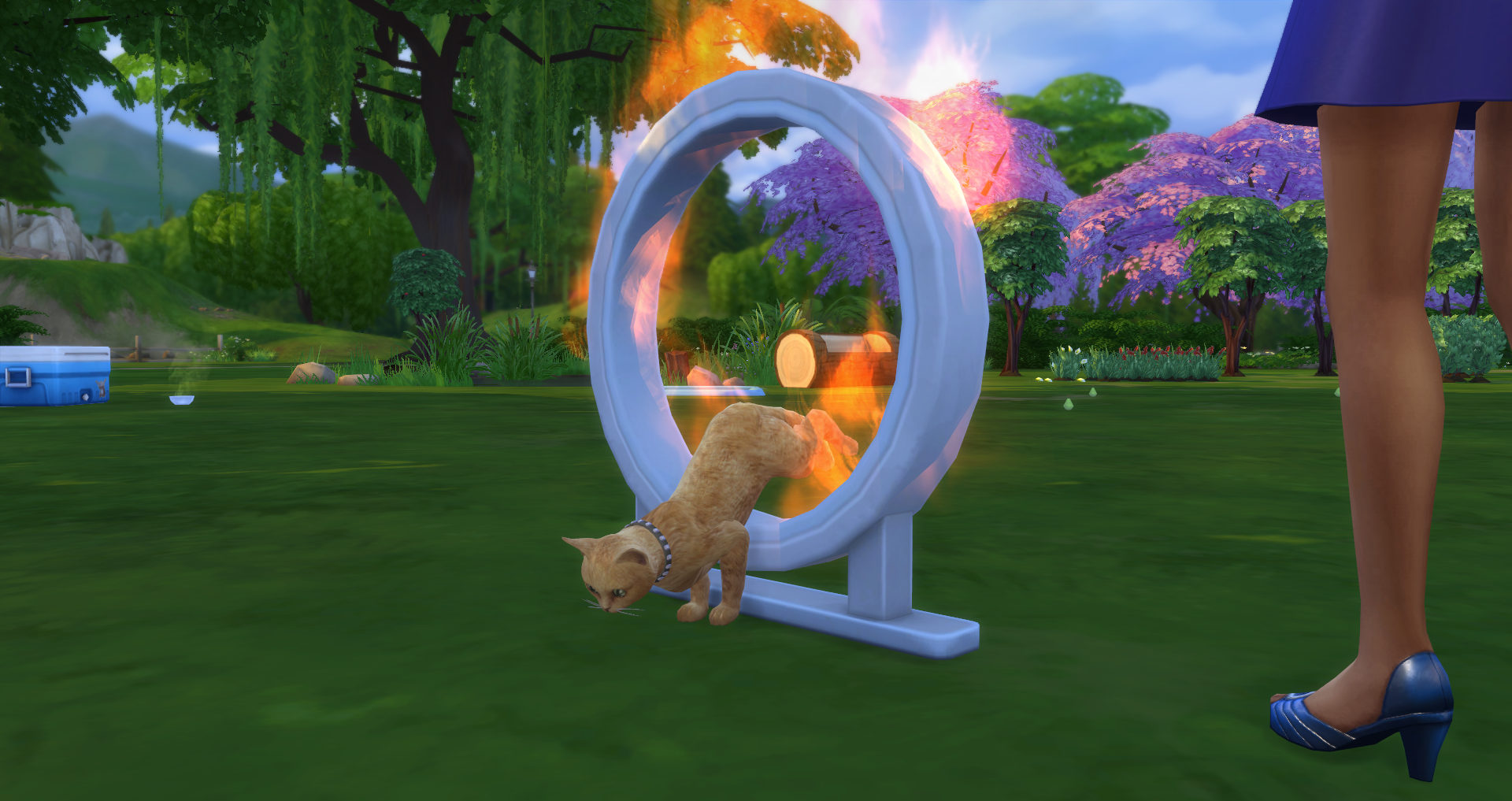 I don’t think I’m ever going to do that again. She made it through unsinged, but the fire that close to my cat scare the daylights out of me. Nope, never again.

That wall I set up? Yeah… It’s my bathroom! Sort of. I put a toilet and a sink behind it. And the backside is kind of protected by trees so it has a little bit or privacy. I’m working on getting another wall up soon, I just need to take my harvest to market. 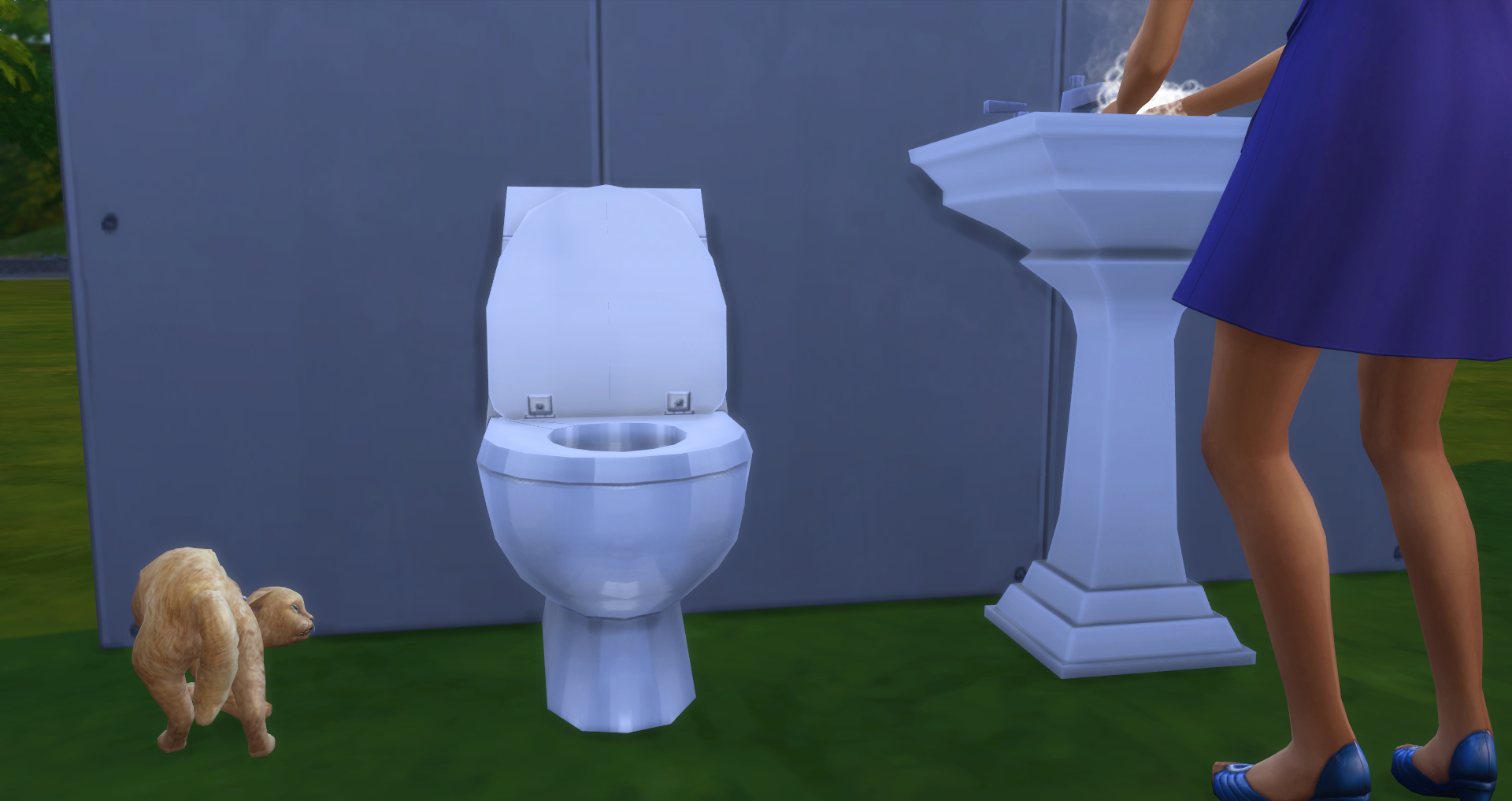 Oh no… Aimee is scared of plumbing. I completely understand plumbing is the worst part of building a house. I’ll make sure that the bathroom and the litterbox are completely separate in my end design. Thanks for the feedback, Aimee. 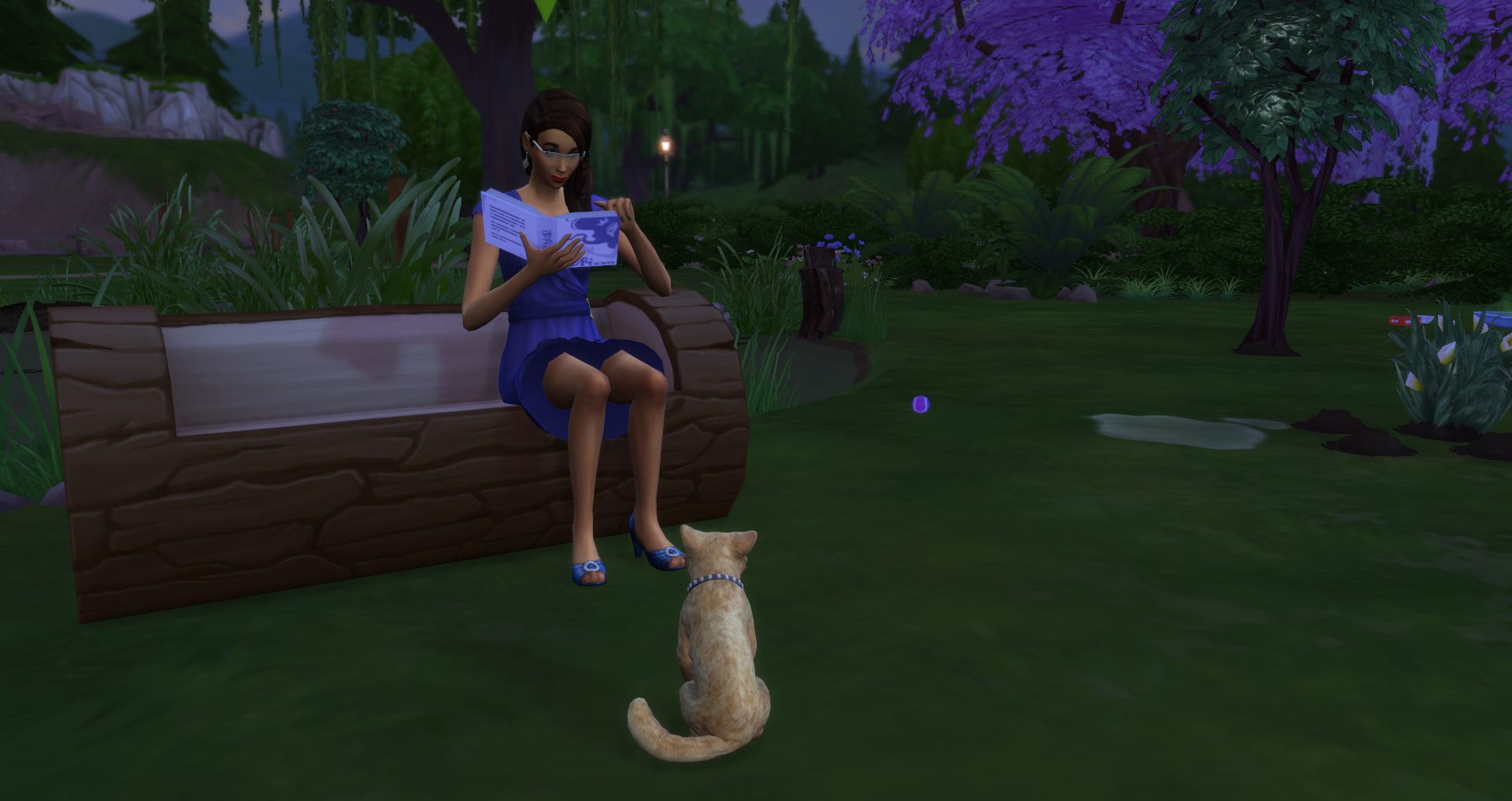 It was already too dark to read, and I don’t have electricity yet. So I made up a story and read out loud to Aimee. She sat attentively listening to the entire story. She is really quite intelligent. I’m super proud of her.

As we were finishing up the book, I got another phone call from Neelesh. I’m feeling uncomfortable being home alone in the dark right now, so of course, I said yes. 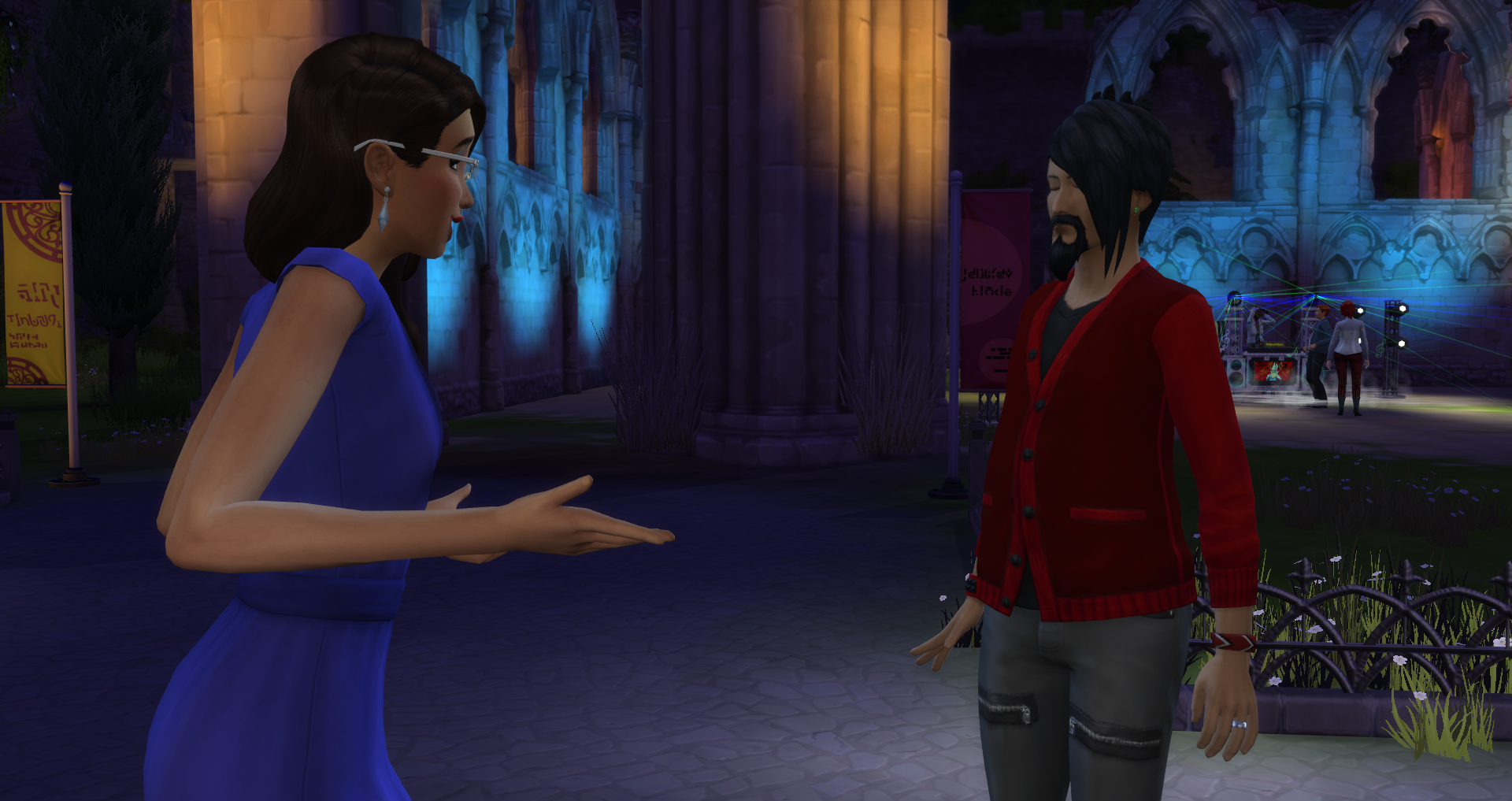 I thanked him for inviting me out again. He looked kind of surprised when I actually showed up, I wondered why until we got on the dance floor. Than I started feeling really bad for him. It turns out that he’s a vampire… and people do no like him for that. He’s so nice though… it really is a shame. Throughout the night I watched him get yelled at to leave and just go home. I moved around to people smoothing things over.

He’s a good guy, sometimes he just has to growl and he can’t help it. Don’t hate him for it. I think some people actually believed me, thank goodness.

Marina the bouncer was on the dance floor again, I guess she likes to go between dance party locations and keep an eye on the public to make sure they’re not causing trouble. I said hello and danced with her. 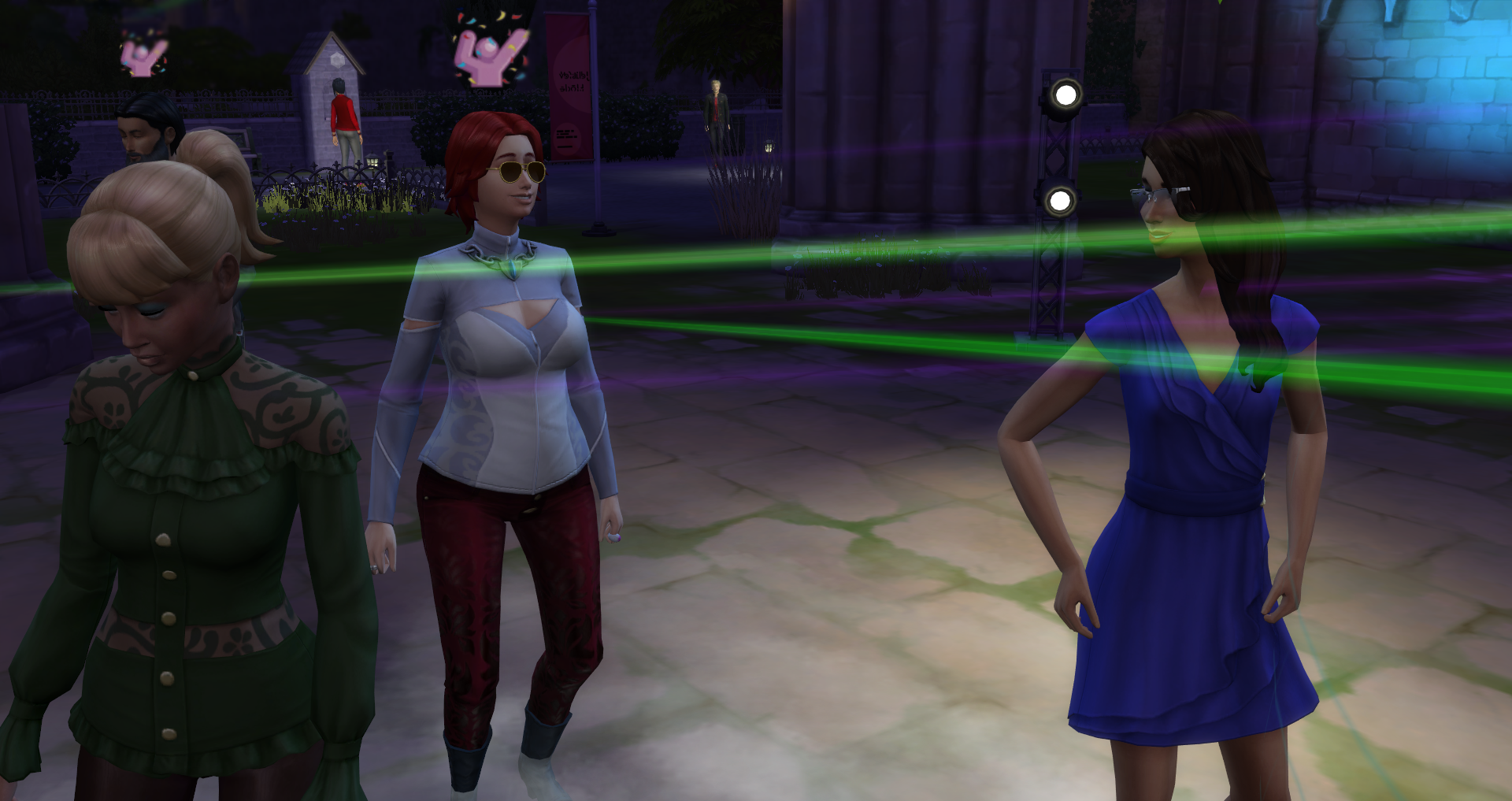 “Why do you keep trying to smooth things over for Neelesh?”

I was surprised when she asked that. “He’s not doing anything wrong. He’s just trying to be himself. It’s not fair that people don’t like him just because he’s a vampire.” 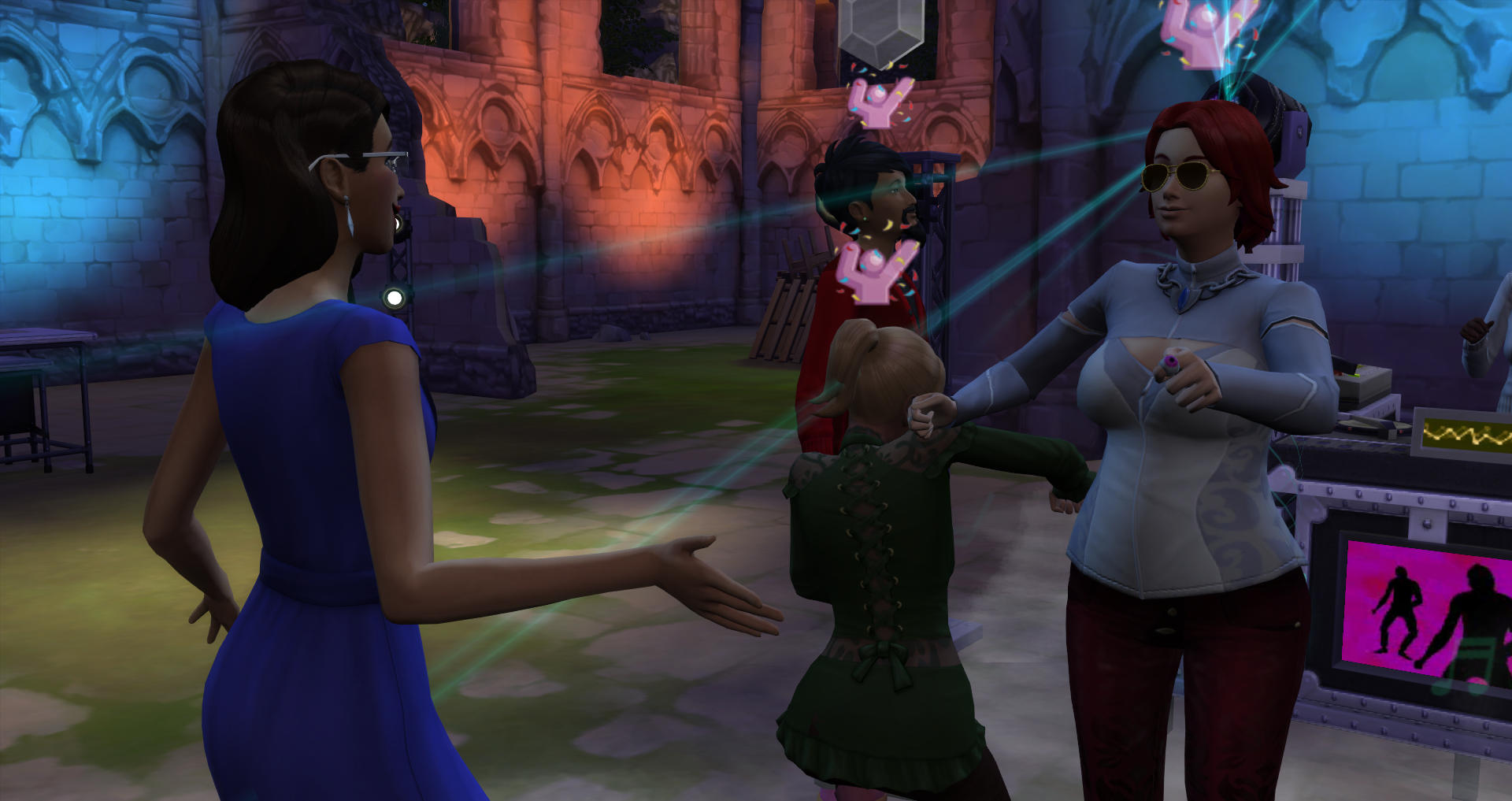 I didn’t expect the night to turn into spending most of my time with Marina. She and I really hit it off. We chatted for hours while we danced. I lost track of time. 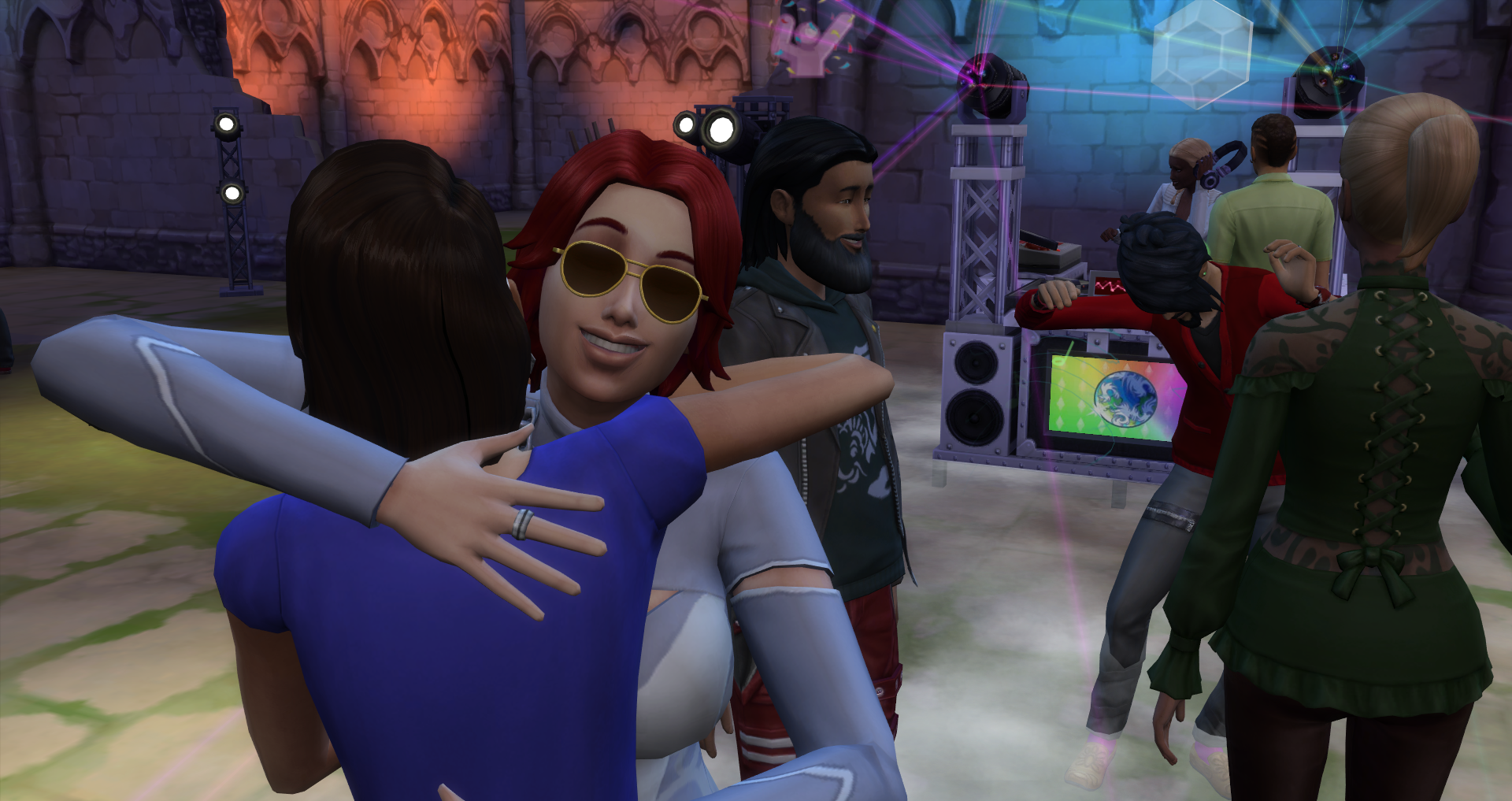 The sun was already starting to rise. I could see a glow on the horizon. I gave Marina a hug and than went around saying my goodbyes to all the friends there that I’ve been making. As I turned away from Marina I realized that Shaurya had been dancing quietly. I gave him a hug and kissed him on each cheek. “Sorry we didn’t get to chat more tonight.”

Then I said goodnight to Neelesh the same way. It would show people I’m not scared of him just because he’s a vampire. “Thank you again for inviting me out. I had a great time.” 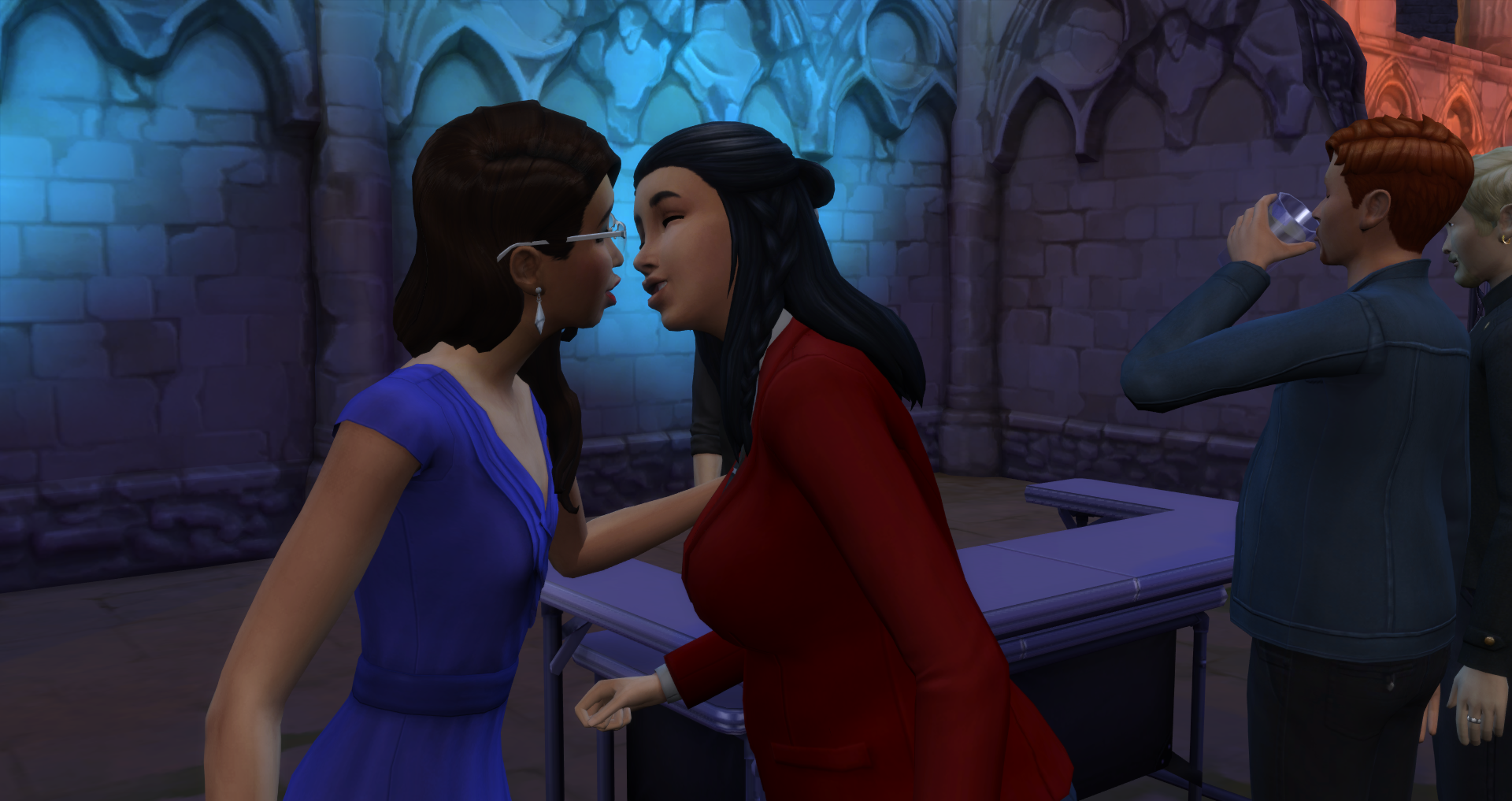 I just kissed Sanvi on the cheeks because she still makes me a little uncomfortable with her obsessiveness, but I couldn’t be rude and not say bye to her as well. Besides, I saw him… he was at the bar watching me. A shiver ran down my spine and I ran back to the dance floor to get a song or two more in to let the sun rise just a little more. 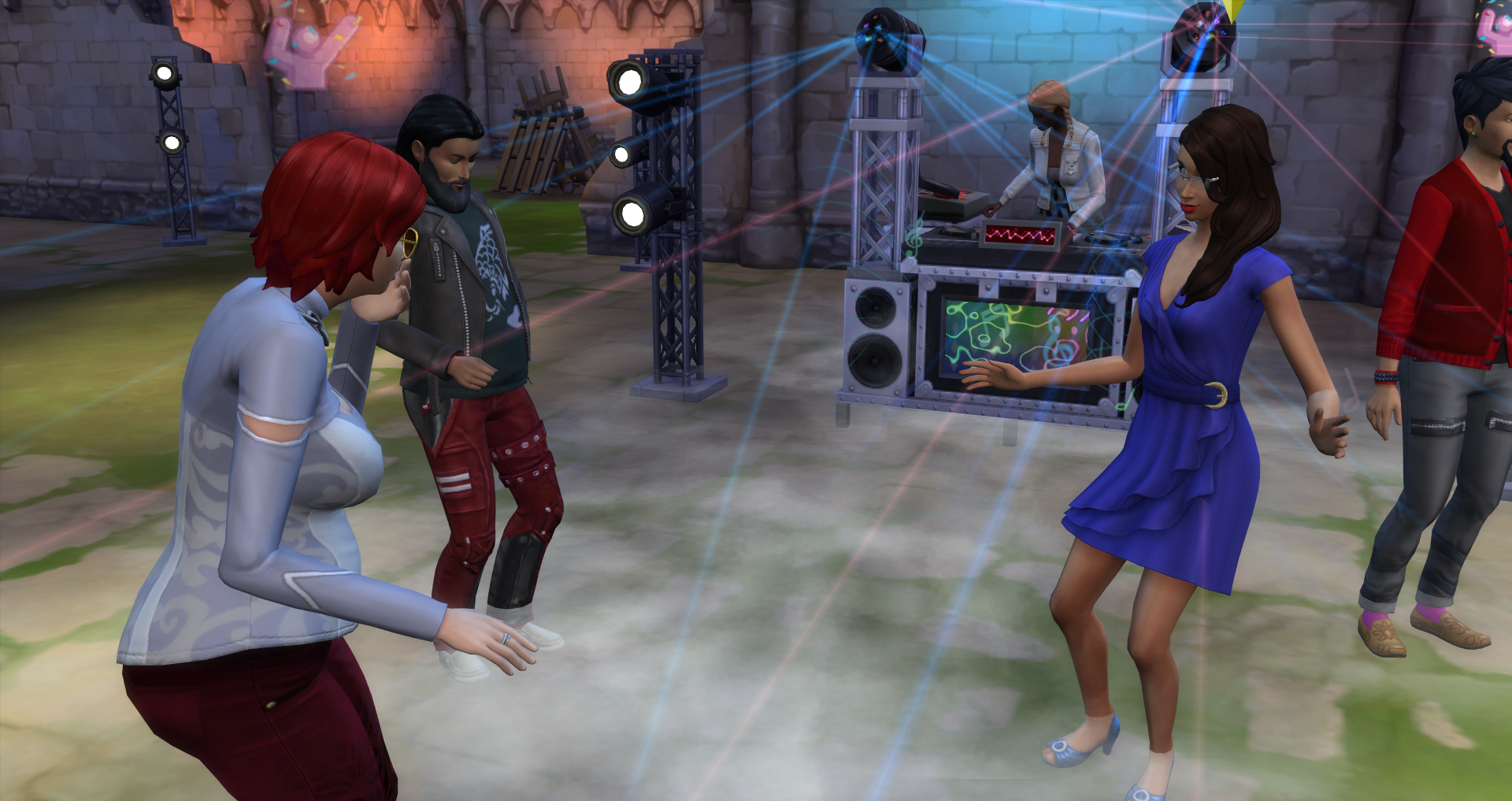 Everyone wondered why I was already back and I blushed. “I uhh, just wanted a couple more songs. I didn’t feel like ending the night quite yet.”

They laughed and danced with me for a couple more songs, appeasing my desire to stay without teasing me about it. We were all having fun after all. 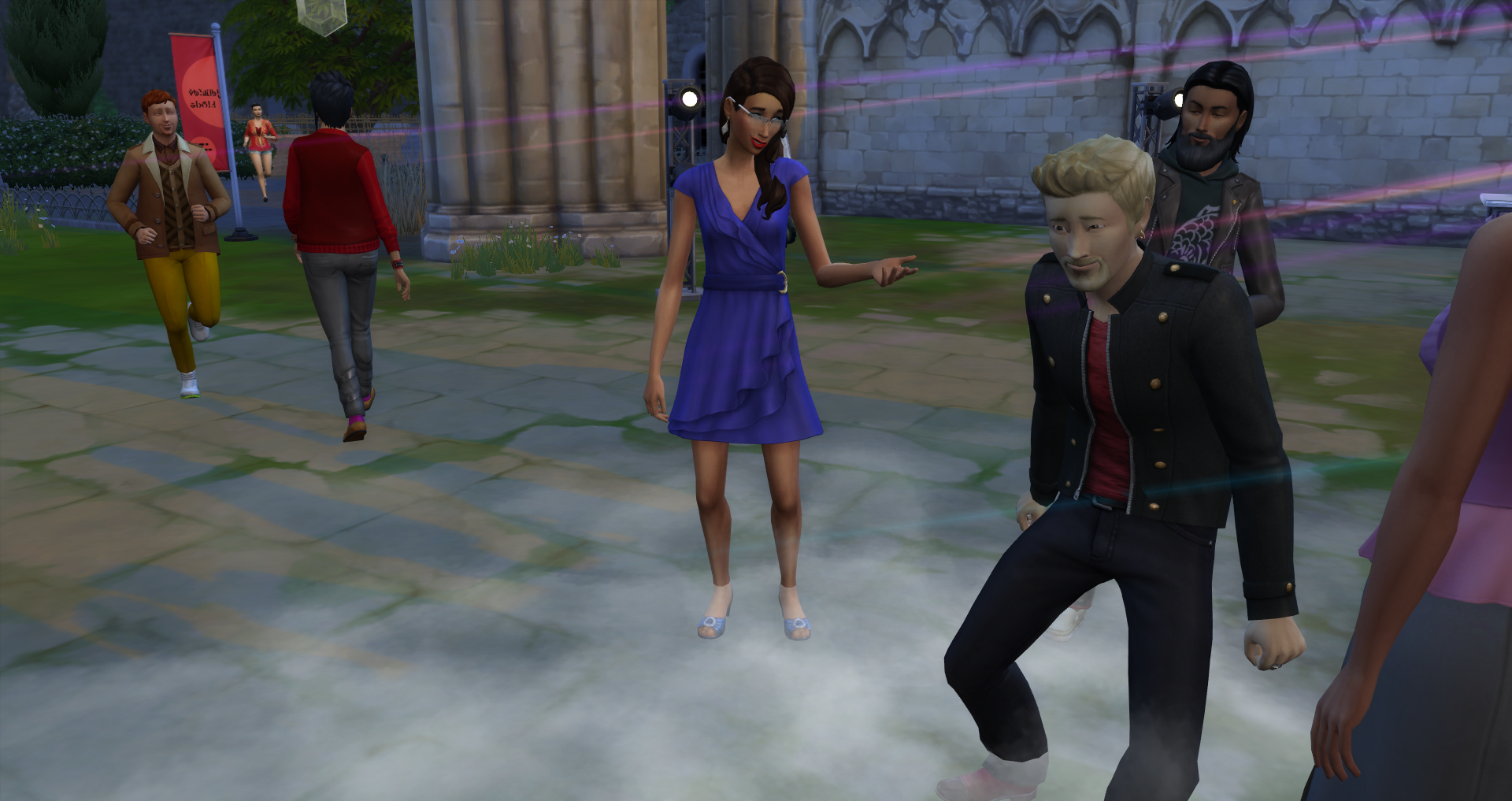 Neelesh gave me another hug goodbye and then headed for home now that the sun was rising. Shaurya leaned close and whispered in my ear to ask why I still wasn’t leaving as a couple songs went by. I waved my hand at the man who has been following me around. “I can’t safely go home until the sun rises,” I said as quietly as I could.

It wasn’t quiet enough, even over the music. I saw the man’s lips turn up into a grin. I shivered. Yeah, not going home yet. I prolonged my goodbyes, kissing everyone on the cheek that I even slightly knew. 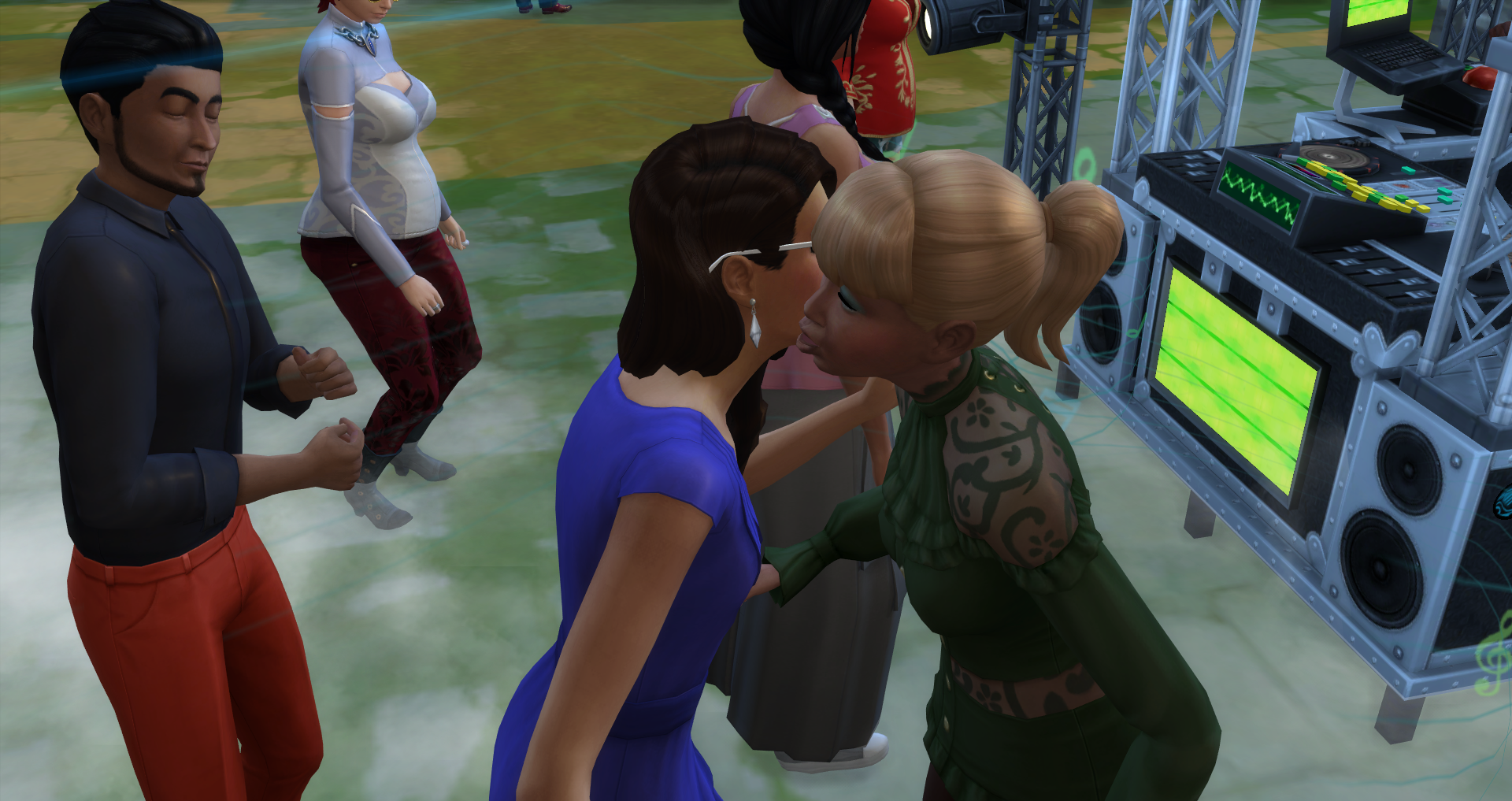 You’ll probably recognize some of them. This girl was at the other dance party as well. She’s a little older for my personal tastes, but she’s already been a good conversationalist for me. I think I’ll probably try to hang out with her on occasions when I’m not busy. Just to have some sit-down and chat time when life seems to be moving to fast.

Look behind me in this photo and you can see bench girl. She was in her own world the entire night. I did say goodbye to her as well though. 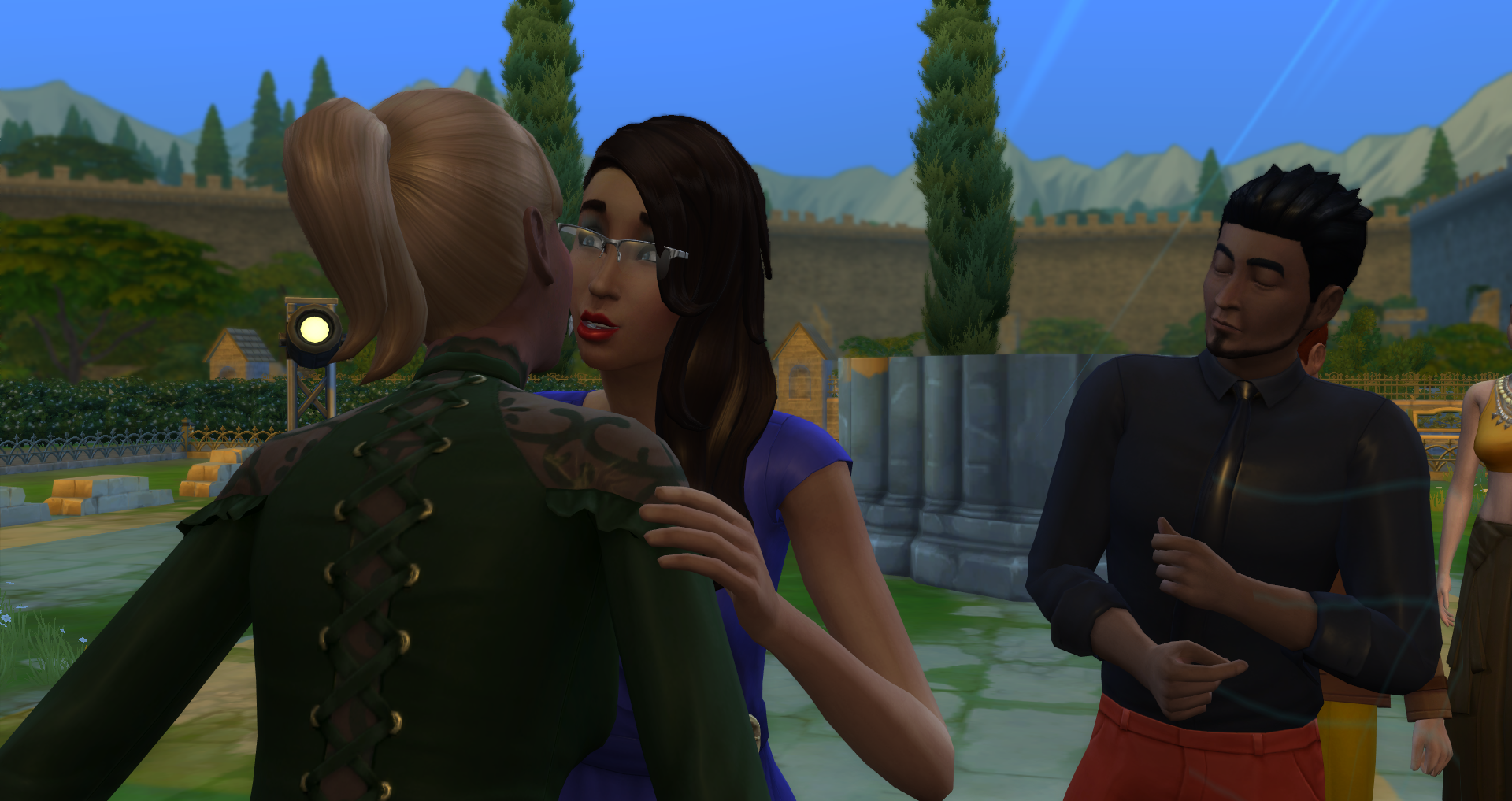 Finally, the sun rose, and I could see blue skies through my tired eyes. Finally, I’m ready to go home and check on my plot of land and make sure that everything is okay. Aimee is a free spirit, so if the scary man showed up, she would have hidden safely. I’ll be fine going home. I have no roof for him to hide out of the sunlight. So he won’t be stalking me for at least twelve hours.