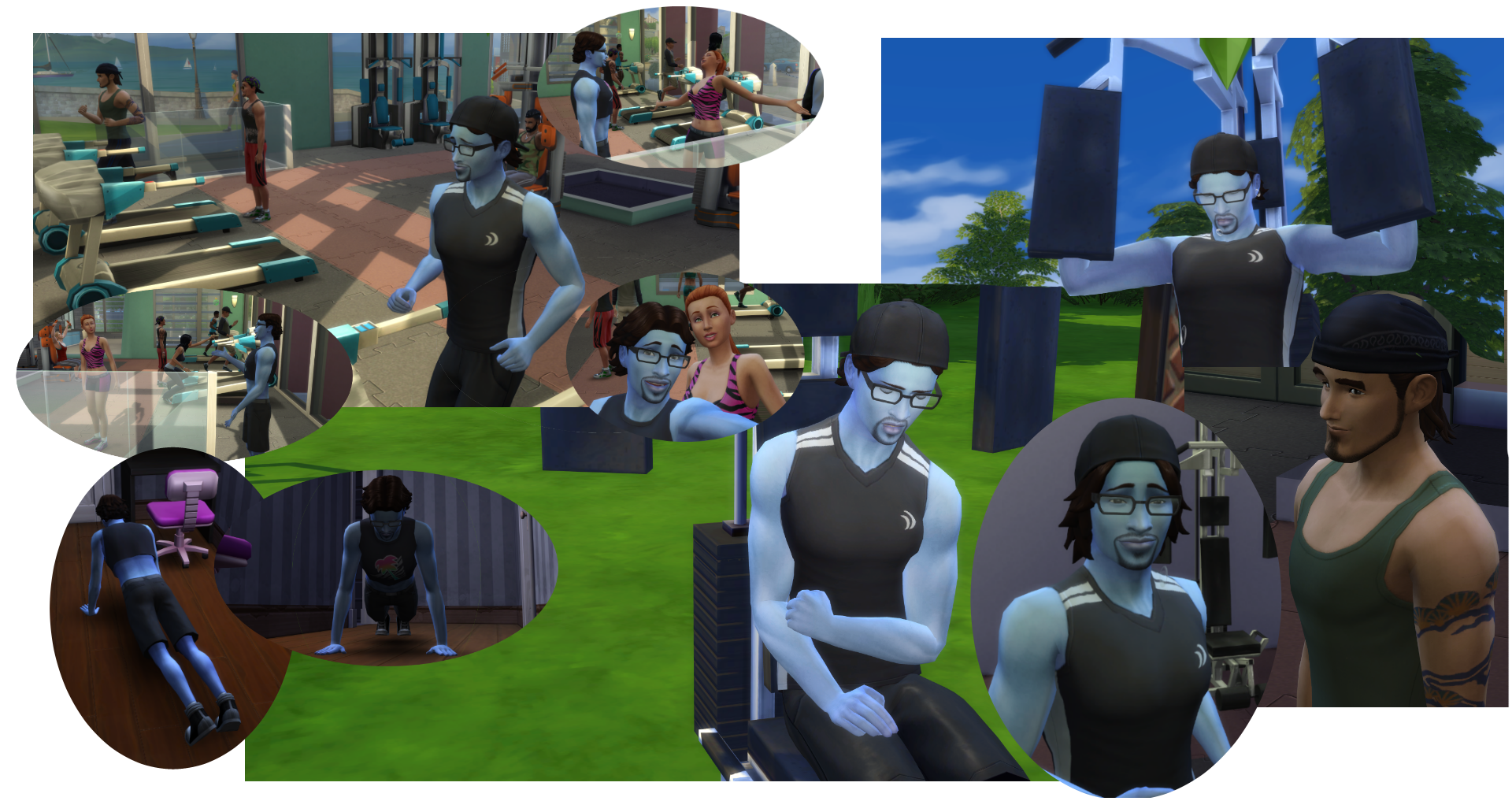 Now that I’ m getting older and my elder years are sneaking up on me, I can’t help but look back on my life. Paolo… my handsome muscle man, I didn’t realize it at the time, but you’ve always been there for me haven’t you. I put in my application at the gym that you and Don worked at because I dreamed of being a body builder. I hoped that one day I could have muscles that rivaled those big guys who can pull trucks with a rope. I think they’re really cool, and it would mean that I could move mountains to defend my family against the merfolk when they come out of hiding.

I didn’t realize that I had caught your attention. I was just thinking about working out, and getting stronger. In fact, I worked out all the time. I even got a home gym with some of the money I had. But my muscles still weren’t very big. So I kept working out. I knew what my goal was.

Get buff, have a family.

You saw me, I don’t know what you thought. Maybe it was, “I love that man.” Because I know now that you feel that way, and I feel the same about you. 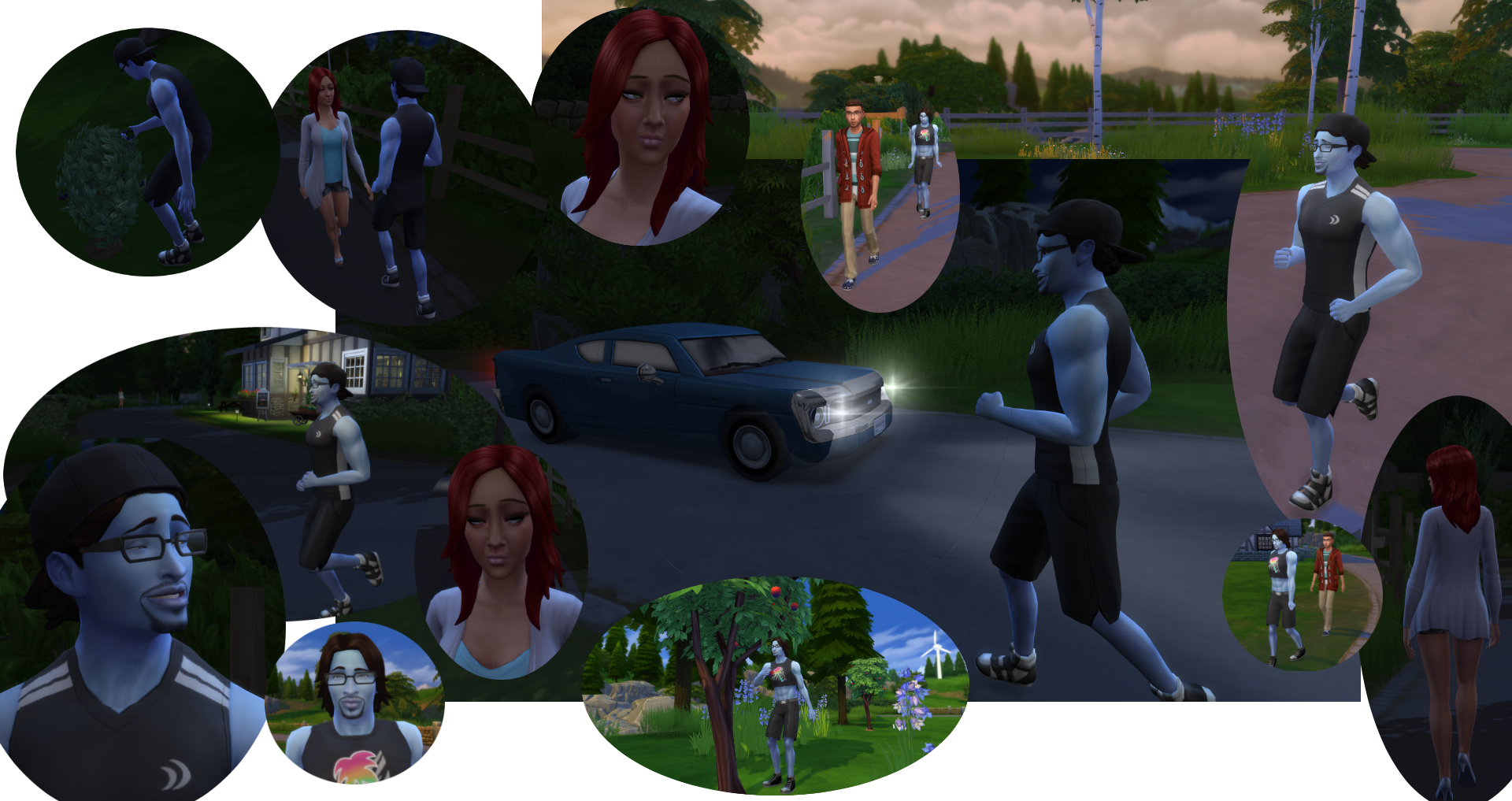 I also made enemies with the Caliente’s that day. Though I didn’t know it. I was just enjoying working out. In fact, my favorite thing was to go out jogging than. I don’t get to do that so much anymore, and I miss it, but I also wouldn’t change what I’ve got now for anything in the world.

I don’t know if my encounter with Nina and Katrina is what made you and Dina get together… I hope not. I don’t know if they were planning anything or what. Maybe they’re in league with the merfolk and that’s why Dina sought you out when I unknowingly broke your heart. 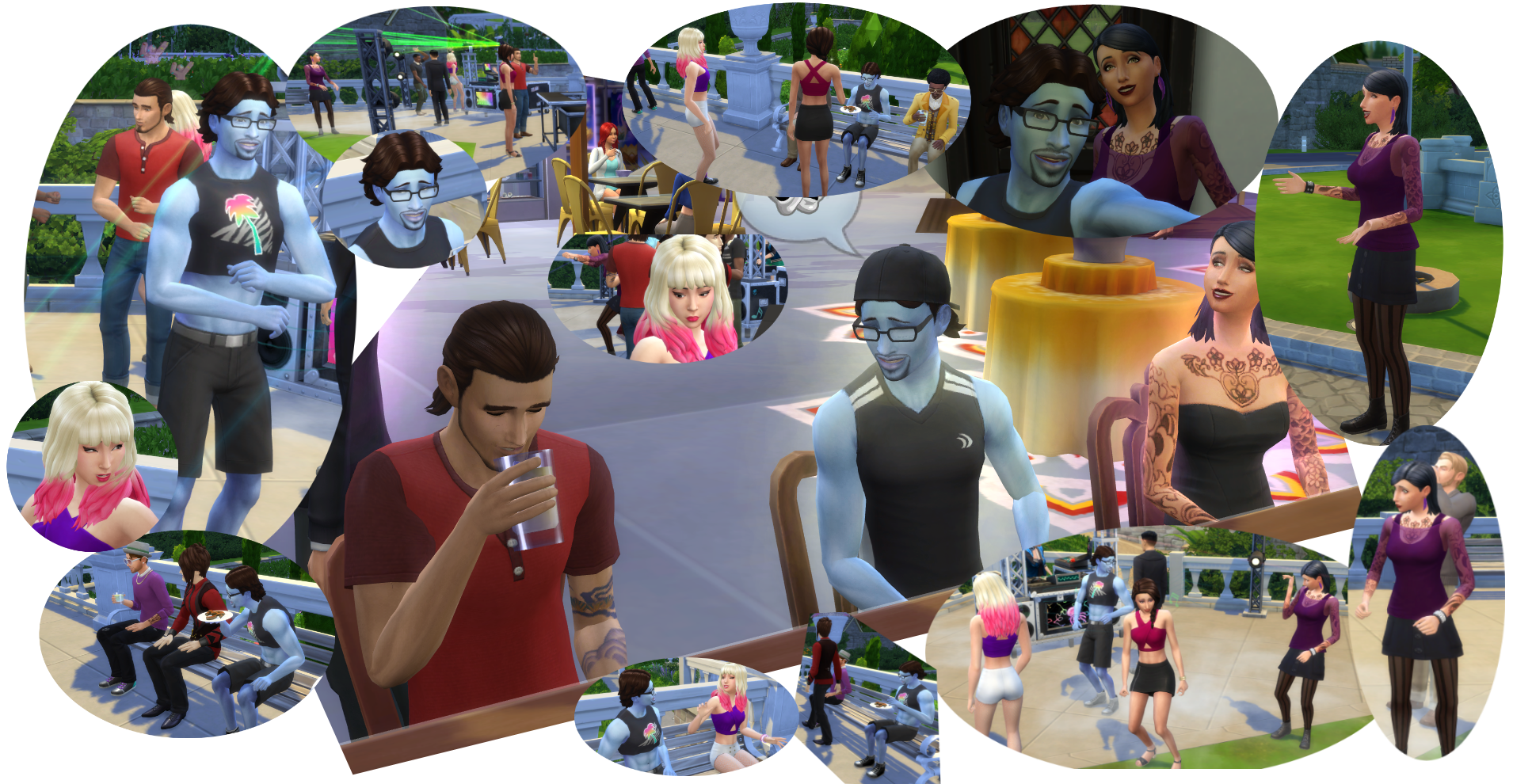 Honestly… I was just trying to find love. I tried Ulrike Faust, she met me when I first moved in. But it didn’t pan out at all. She wasn’t interested in me when she found out how fun loving and care free I am. I thought.

Even than, I didn’t know that you were watching out for me. You were the one who gave her a look to back off. It’s not your fault for what happened next while you were getting a drink at that party. Candy swooped in, and next thing you knew I was gone. I had to go to work. You didn’t know that she was going to call me the next day. 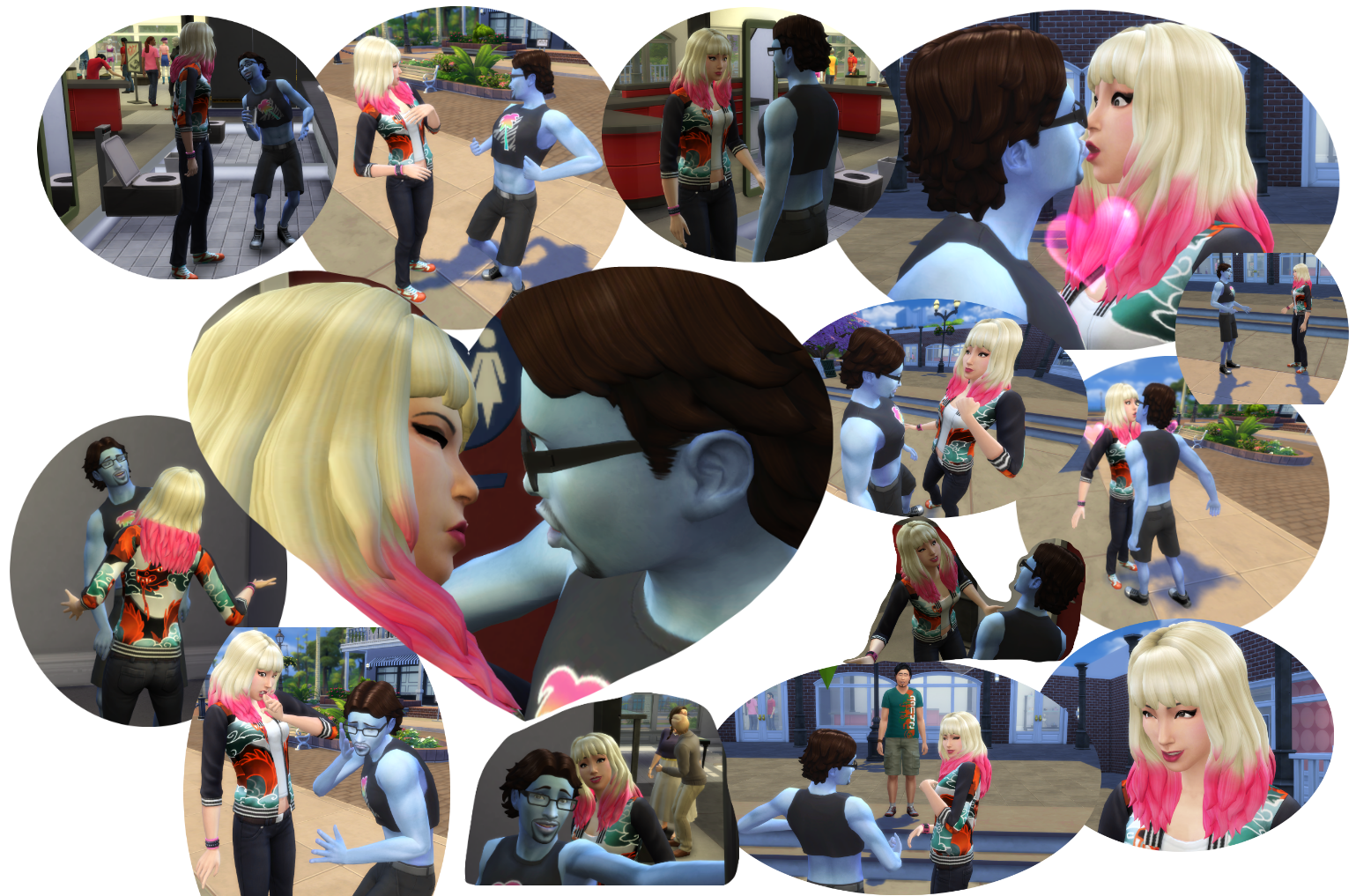 You didn’t know I would fall head over heels for her when she was the wrong person to end up with. Don was there though, and when he saw you at work the next day he told you what he had seen. It’s also how that rumor that Mila Munch and Mr. Bjergsen were a couple got started. Someone thought they saw something that hadn’t really happened. I’m glad that ended up getting sorted out.

I don’t regret it though because it gave me so many beautiful children. Though I wish I could have stopped your pain. I just hadn’t know about it. You never said anything at all. 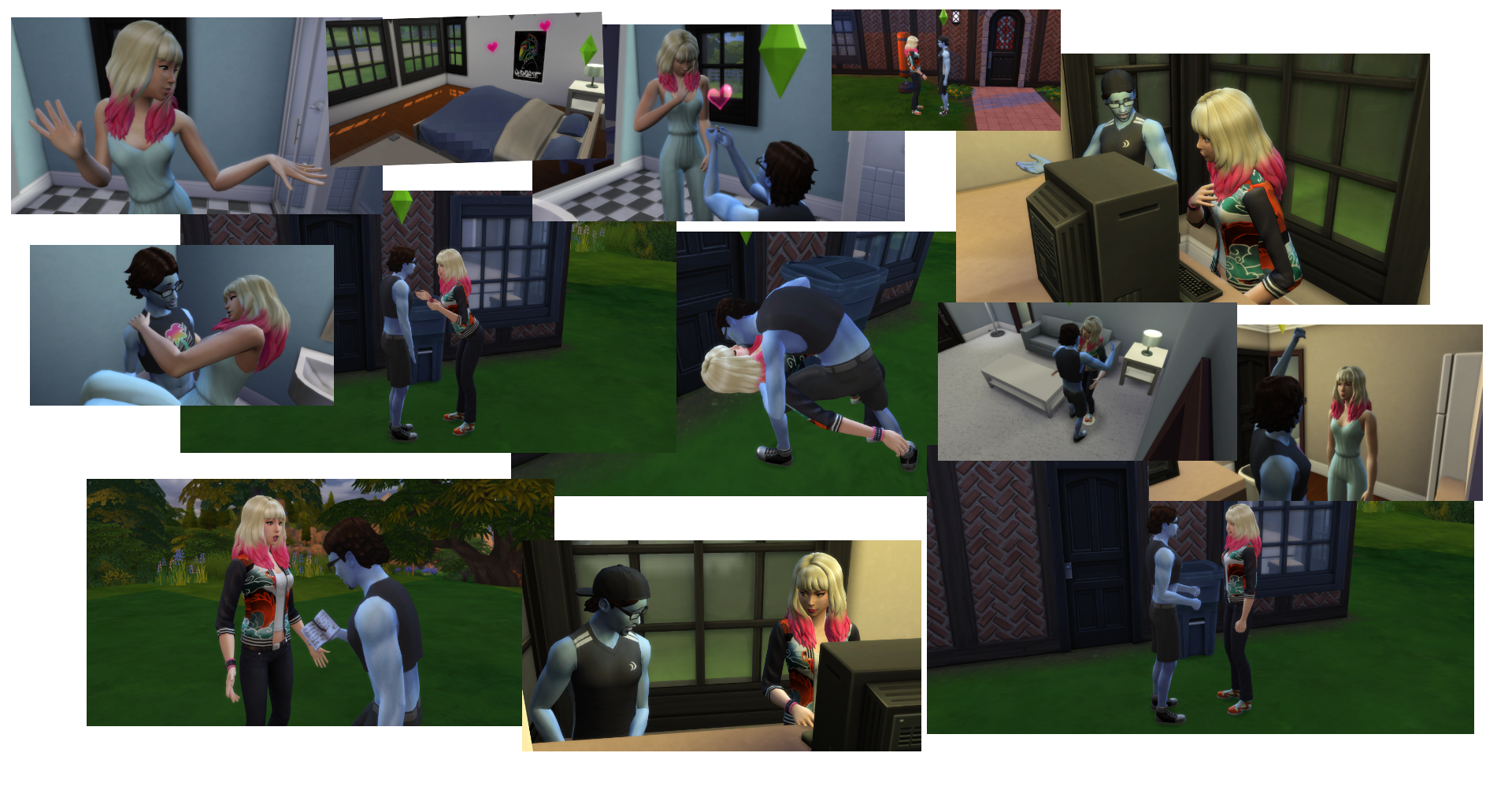 Candy claimed that she was into me. I should have taken the hint when she turned me down the first time before she even got a look at the ring. She was never looking at me like I looked at her. It was always over my shoulder, or at the table next to me. I didn’t notice… I was always looking at her. When she did look at me it was because I’d given her something she wanted.

Even back than she and I were fighting. But they say that all couples fight. I thought it was a normal part of love. 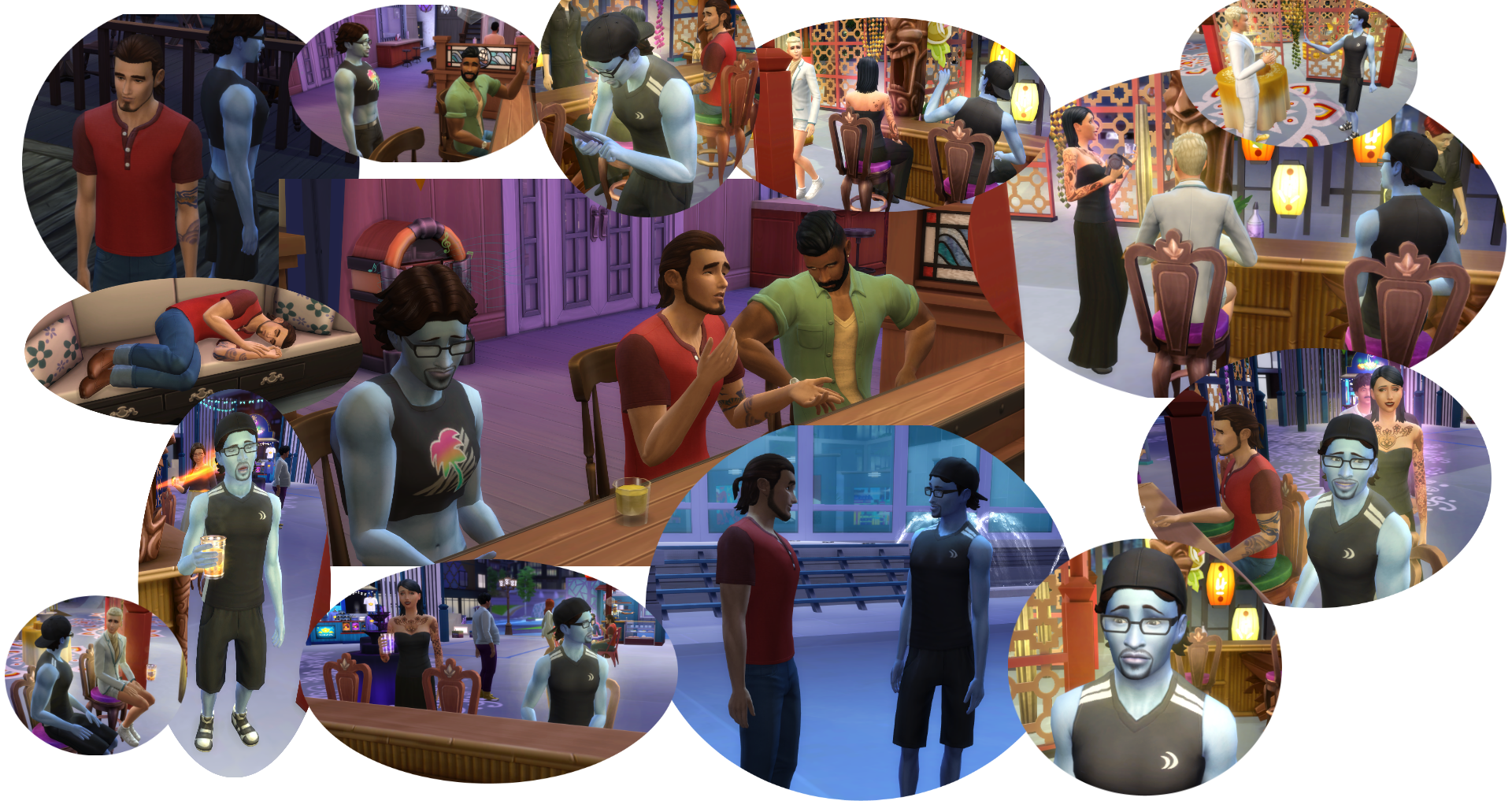 You invited me out after I got a promotion at work ‘to celebrate’. You were hoping to tell me that night that you liked me… that’s what you’ve told me now that we’re together finally. But our other coworker Brent tagged along. I didn’t know than that you were fighting with him to try to get a private word with me. I didn’t know than that it was why you went and curled up on the couch all adorable.

I didn’t know that you were hurting than.

Hindsight is really hard to think about.

Than when I told you that Candy was pregnant, you were excited for me, but sad for yourself. You knew there was no way that you could be with me after that. But you kept it to yourself and invited me out to the hijinks festival to celebrate again. You were always asking to celebrate my life.

I should have seen it in your eyes than. The way you were looking at me.. But I’m blind, I didn’t notice. You started chatting with Katrina, and she made sure to set you up with her daughter. I’m not sure what her intention was. I wasn’t even paying attention, I was to distracted by Wolfgang’s outfit. Actually I was a bit jealous, I wish I looked that awesome in shorts and a suit vest!

What hurt the most was that Faust was there trying to flirt with me, wasn’t it? She was trying to swoop in and get to steal me back even after you’d warned her off. Or…. actually. Now that I’m looking at this picture again that you took. She had a voodoo doll! Did she curse you? Well I’m glad I’m here to protect you now.

You put on such a brave face all those times we went out. I’m sorry I never noticed how truly bad you were actually hurting. But you were still right there for me when I got the call that Ambrosia was coming. 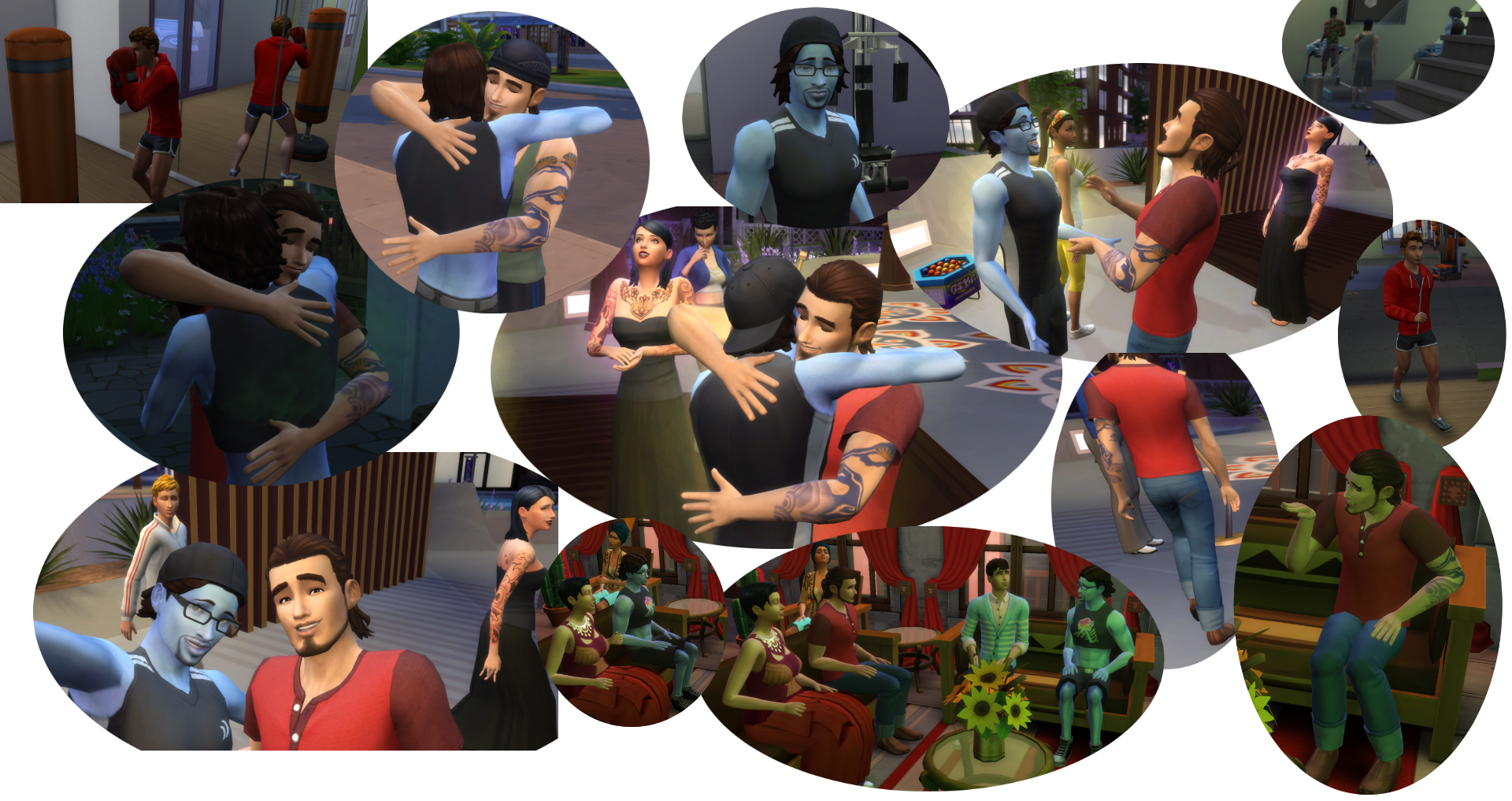 We celebrated my being a father than as I told you that Ambrosia had been born. I think Penny knew there was a spark between us. Look at her face in this picture I found. Anyways. I’m glad you were there with me when I got the news.

I am again… sorry that I didn’t notice from the beginning what we could have had. Or that when you invited me out the next time you were fighting with Dina because you didn’t want to be with her in the first place. You were hoping that I would hear you out finally. My daughter getting older. I was bound to be ready to listen.

Of course I was exhausted from my late nights of parenthood, and had the news to share that I was pregnant again. So you chose instead to keep the real news to yourself and just complain about Dina, which I did my best to help you out with, not knowing my advice using arguments with Candy as reference were useless because she didn’t truly like me as I thought she did.

That’s where you met what’s her face… Yumiko? right? She was sitting next to us as we talked. I found out about what happened later on from the crazy doctor that helped deliver Ace. Have you even met Brendon and Zion yet? I’m not sure if Yumiko every told you. But Ace talked about the Kobayashi twins that are in his class at school. I didn’t think much of it right away until i put two and two together later. They’re your sons I think.

It’s probably to late now, especially since she hasn’t exactly welcomed you into her life after the night. Sometimes I want to know what happened, but mostly i don’t. I feel bad enough that I didn’t know what you truly wanted that night Paolo. That’s why you shouldn’t tell me unless you want to bring up those memories. I just… you know, I just thought I should tell you that you have two sons with Yumiko incase you didn’t know.

By the way, have I ever told you how I love that you close your eyes whenever we hug. It’s so sweet.

After Ace was born we went and hung out at the gym together with Brent and Brant. I know you were still mad at Brent… or was it Brant? at that point. But I guess he had also figured out that you liked me way before I did. So he and his husband were both there to keep an eye on us and offer a friendly hand if we needed it.

My being oblivious, and you keeping your interest to yourself. And your clear anger about him how’d you say it than, “butting his nose in where its not wanted,” was probably what made him finally back off so we could just enjoy a day of working out together. That’s when you told me that Dina was pregnant wasn’t it? Or was that later? I don’t remember now. 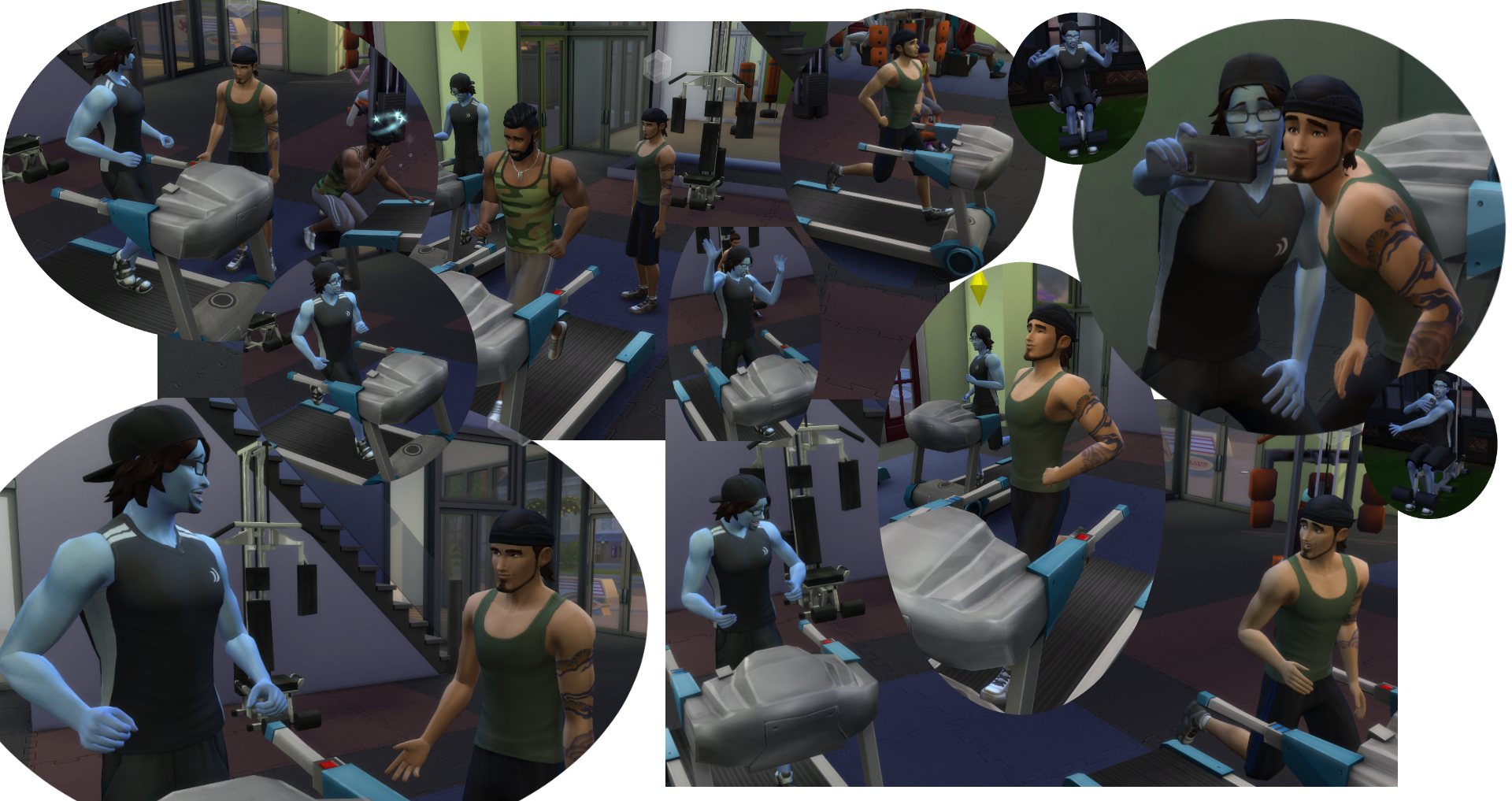 No that had to be later because Anna and Austin were on their way already when Dina got pregnant. I remember now. It was a really wonderful day out at the gym though. We definitely haven’t done enough of those over the years. We should do another one soon. Hmmmm, I think I might suggest that to you once I finish this scrapbook page up. That sounds like it could be a really fun time.

Oh I know! We can go swimming at that first gym we met in when I was putting in my application. I haven’t been back since I became a professional bodybuilder. 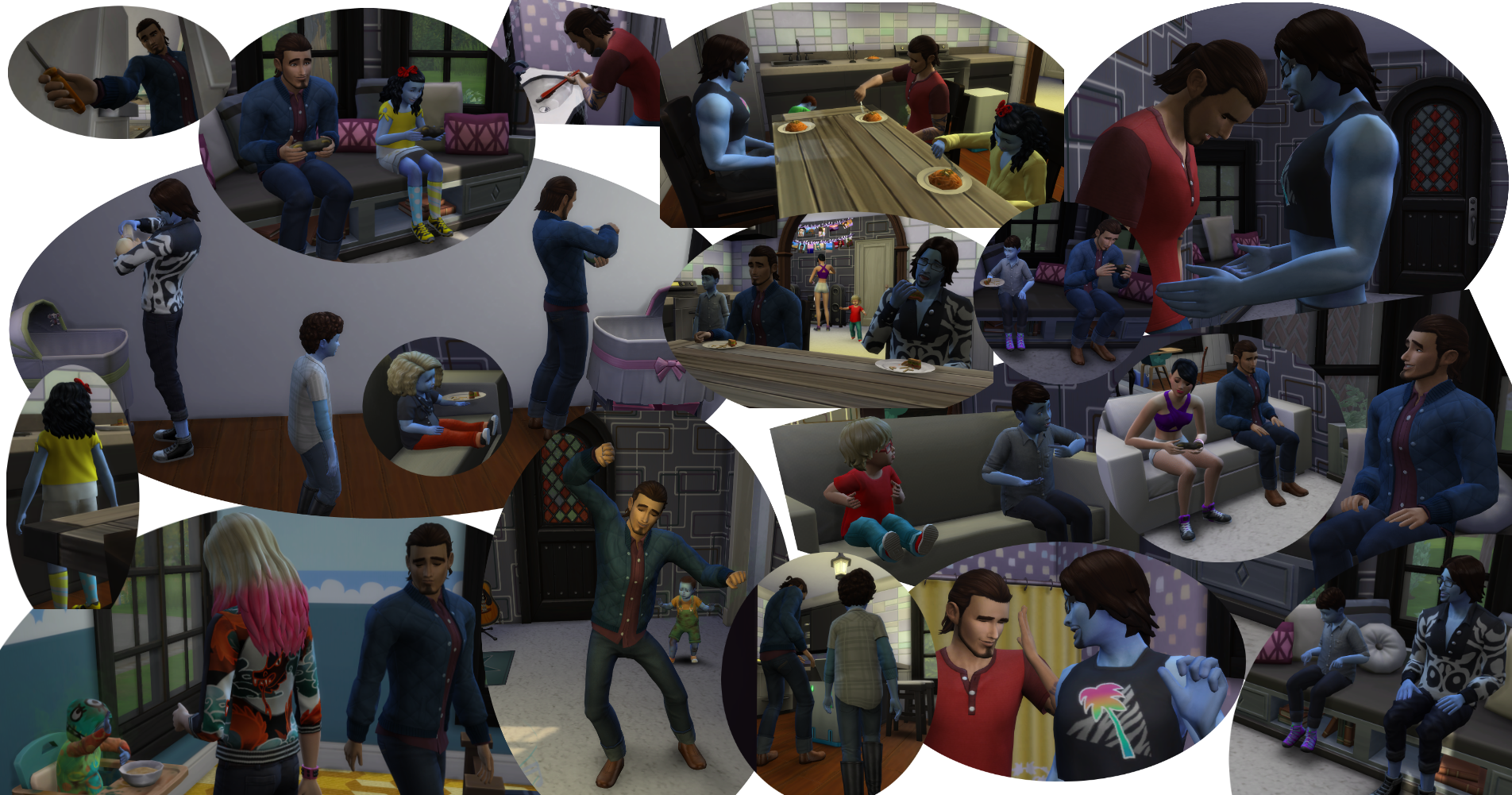 Ambrosia and Ace really got attached to you those early years now that I think back. Naming you Uncle Paolo. I think Ace still calls you that right? Guess old habits are hard to break, but even than you were family. You were there for me when Ambrosia was born, we talked on the phone the day Ace was born from the hospital, and you were there for every birthday party throughout the years.

No surprise why you and Candy hated each other. She didn’t want to be a part of this family, and you did. Well you both got your wish, but maybe it could have been sooner? Before Candy and I had a big falling out…

Before Faust’s curse took effect and had you out at the bars drinking and hanging out with woman you didn’t want to be with. That was the curse she put on you with the voodoo doll right? Yeah must have been. Anyways, it was super awesome that you were always coming over helping me out with things around the house. And congratulations on Michael, Rodney, and Iris, even though you had to leave them behind with Dina when you moved in with me. We’ll invite them over sometime soon.

It’s getting really late so i’m going to end this scrap book page here. I just want you to know I love you Paolo, no matter what happens to us from now on. Thank you for being part of my life.

5 thoughts on “Antwan’s Scrapbook: Page one”